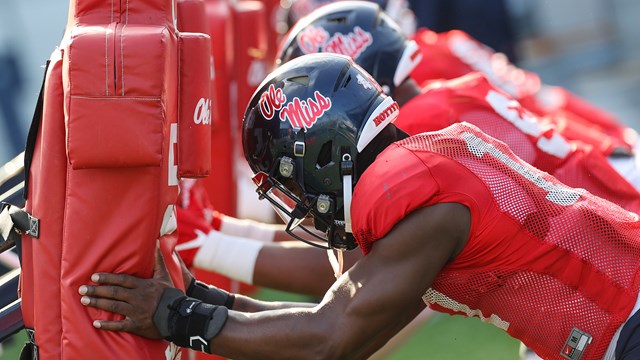 Now less than a week removed from the start of classes, the Ole Miss football team continues to squeeze every drop of progress they can from each practice. As the season draws near, the hope is that the new-look Rebel squad will coagulate as well as they did a year ago.

Defensive back Miles Battle, running back Kentrel Bullock and defensive lineman Demon Clowney met with the media after Wednesday morning’s practice to provide the latest on how the 2022 Rebel squad is coming together.

RUSH AND COVER
On the defensive side of the football one word has been thrown around more than any other during fall camp: depth.

Ask any Rebel on the defensive line or in the secondary, and they’ll happily report that this team—more than any in Oxford in recent memory—has the depth on both the front and back end to succeed in the Southeastern Conference.

“One of our mottos here is ‘coverage and rush.’ And we say ‘one unit,'” Battle said. “That means, with the coverage that we have on the back end, we know that our D-line is going to get to the quarterback. They’ve made that a big emphasis this past spring, this fall camp and this upcoming season. With them rushing the passer and us covering the receivers and running backs and everything, I feel like it’s going to be something great.”

Battle leads a cornerbacks room that must replace its top cover man from a year ago in Deane Leonard. However, Battle will be back for his third full season at corner after coming to Oxford as a receiver. Deantre Prince is returns as well, and the two have already been joined at the top of the rotation by true freshman Davison Igbinosun, who has been arguably the most-talked-about player on the Rebel roster this fall.

“You don’t really see many freshmen play like he has this fall camp and this past spring. He’s been up there with us and the ones. He’s going to be a great asset to our team as well,” Battle said. “Not having that depth hurts you on the back end. Being able to have the depth now is going to be a great thing for us.”

NOT CLOWNING AROUND
On the defensive front, Ole Miss boasts more size, talent and athleticism than ever before. Despite having plenty of viable candidates, the 2022 group will have its hands full replacing one of the best pass rushers ever to wear the Rebel red and blue, Sam Williams. Williams racked up 22.5 sacks and 33.5 tackles for loss in his collegiate career before moving on to the NFL.

Cedric Johnson, along with returner Tavius Robinson, Georgia Tech transfer Jared Ivey and others, are expected to fill that role on the edge. Clowney, after notching one sack in six appearances last season, and the fellow returners will lean heavily on all Williams taught them as they enter the 2022 campaign.

“Of course it was tough for me, because I’m a competitor and I want to play, but it was good for me to sit behind someone and see what it takes to get to the next level,” Clowney said. “Sam was a great guy, we talked a lot. Of course I asked him things, what he sees and how he does what he does.”

With several talented upperclassmen seemingly holding starting spots on the defensive front, and with the Rebels thinner at the linebacker position, Clowney has taken a step back off the line and to the linebacker spot this fall. Whether he ultimately stays at linebacker or returns to the edge, the sophomore out of Baltimore just wants to contribute in any way he can.

“I’m pretty confident. Coach Partridge, Coach Joiner, Coach Crum—they give us all the tools to be the best we can be. I’m always confident in myself,” Clowney said. “I don’t really put myself in the box. I want to be able to do whatever the defense requires me to do. If that’s on the edge or at linebacker, wherever fits.”

OPTIONS AT RB
In similar fashion to defensive back and defensive line, the running back position will look much different for the Rebels in 2022 as they look to replace some of the best to ever carry the football at Ole Miss.

Both Jerrion Ealy and Snoop Conner have moved on to the professional game, while the No. 3 back, Henry Parrish Jr., transferred out after the trio combined for 1,968 yards and 21 touchdowns on the ground a year ago. Also similar to defensive back and defensive line, the Rebels have plenty of viable candidates to fill the void.

TCU transfer Zach Evans seems set for the lead role in the room after running with the ones for the majority of camp. After that, the Rebel coaches will have some decisions to make with several talented runners and only one football to share between them. Ulysses Bentley IV brings more veteran experience to the room after transferring from SMU. There has also been a lot of talk around bruising freshman Quinshon Judkins.

Not to be forgotten, Bullock the lone returning scholarship running back, has put together a strong camp himself. Bullock tallied 78 yards on 17 carries a year ago, and he hopes to see that role expand in both the running and passing game—though he isn’t getting caught up counting carries or snaps as he looks forward to the season.

“I look at it as, it’s just media. It’s outside noise to me. It goes in one ear and out the other ear and use that as my motivation to do what I do,” Bullock said. “I don’t think about that type of stuff. I just know that, when it’s my turn, I’m going to go.”