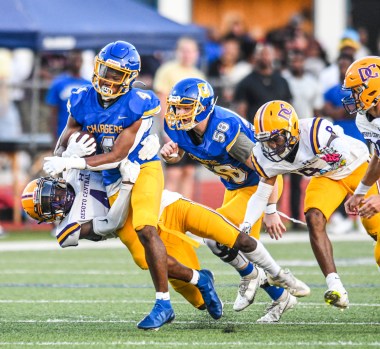 Oxford running back Roman Gregory (4) vs. Desoto Central in a jamboree at Bobby Holcomb Field in Oxford, Miss. on Friday, August 19, 2022. (©Bruce Newman) 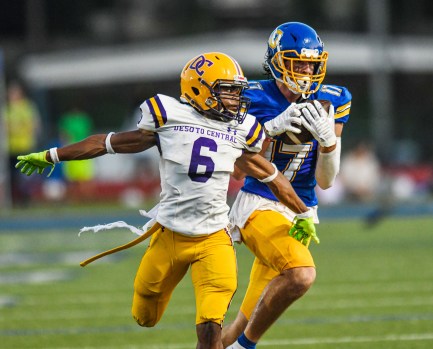 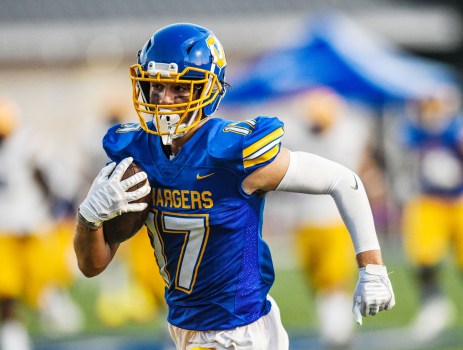 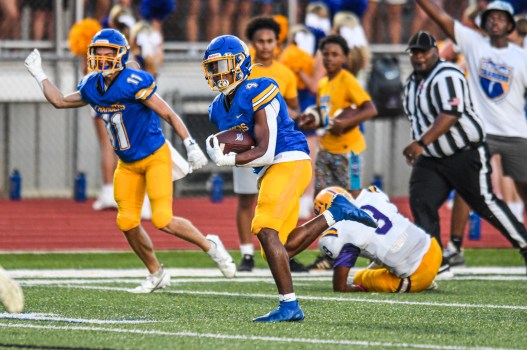 Oxford running back Roman Gregory (4) scores on a pass play vs. Desoto Central in a jamboree at Bobby Holcomb Field in Oxford, Miss. on Friday, August 19, 2022. (©Bruce Newman)

Oxford football is going to put a lot of points on the board this season.

The Chargers’ high-powered offense was on full display on Friday as they hung 48 points on the board in a Jamboree win over DeSoto Central.

Transfer quarterback Mack Howard was stellar for Oxford—showcasing his superb arm talent and next-level pocket presence as he exploded for three touchdowns in the first half.

“Our mindset coming into this game was to show everybody what we’re gonna do this year and how we’re gonna do it,” Howard said. “It was a really good game for us—the whole team, collectively, played really well.”

He was aggressive throwing the ball downfield—taking deep shots nearly every time he had a receiver in single coverage.

Head coach Chris Cutcliffe said he was pleased with the way his quarterback maintained composure and protected the ball despite facing pressure on nearly every dropback.

“I thought his decision-making was really excellent,” Cutcliffe said. “Peter Grandjean got some quality varsity reps as well and they both did a good job of taking care of the football. That’s always a huge focus anytime but certainly in scrimmages, Jamborees we talk a lot about ‘no turnovers’ so I was proud of that.”

Running back Roman Gregory also put on a show for the home supporters—tearing through would-be tacklers and leaving the Desoto defense scrambling for answers.

The senior tailback took advantage of some defensive miscues for the Jaguars as they struggled to keep up with the Chargers’ up-tempo offense.

“We were trying to get the offense going today—just go with tempo, go as fast as we can. That was really the main goal and it worked too—they were tired on the first series,” Gregory said.

Oxford also dominated on the defense end—surrendering an early touchdown on a breakdown in coverage before settling in and controlling the line of scrimmage.

They even got in on the scoring action when cornerback Ryan Kirkwood scooped up a fumble early in the second half and took it 40 yards to the house to extend the lead to 42-7.

“Across the board—I thought we played with a lot of energy in all three phases. I just felt like we were clean in the way we played as well, which is always great to see in a preseason Jamboree,” Cutcliffe said.

The Chargers kick off their season in earnest next week when they travel to Brandon to take on the defending South half-champion Bulldogs at 7:30 p.m.