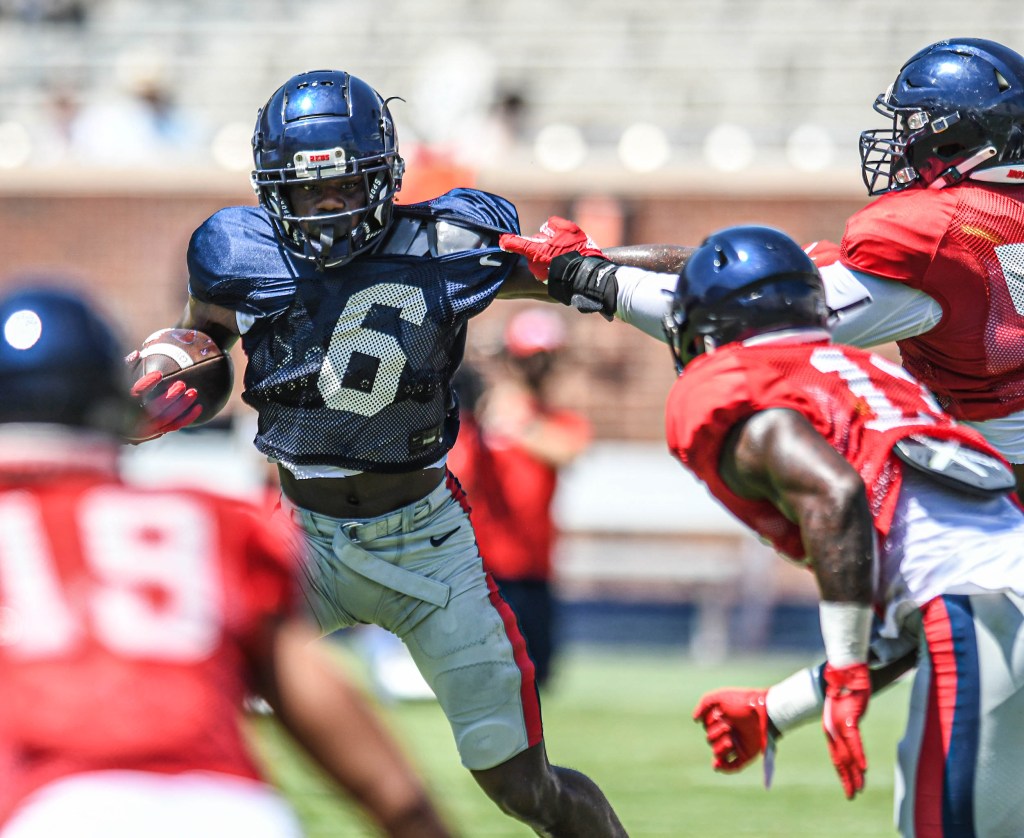 Zach Evans (6) is grabbed in the backfield by Zaid Warren (54) during Ole Miss football practice in Oxford, Miss. on Saturday, August 13, 2022. (©Bruce Newman)

The hard work continues under the hot Mississippi sun for the Ole Miss football team during 2022 fall camp. For head coach Lane Kiffin and his staff, the evaluation period is beginning to wind down as the season draws ever nearer.

Kiffin, linebacker Troy Brown and defensive lineman Jared Ivey met with the media after Friday morning’s practice session to detail the latest from inside the Olivia and Archie Manning Athletics Performance Center.

ALL TOGETHER NOW
One of Kiffin’s chief concerns for the Rebels heading into this past spring, as well as fall camp, was how quickly a roster laden with transfers would gel. Ole Miss currently has 40 players on its roster who previously played elsewhere at the collegiate level, as well as 28 true freshmen.

A year ago, the Rebels had 30 players who transferred to Ole Miss from another four-year institution or junior college, as well as 30 true freshmen. That team was able to develop the chemistry they needed to succeed, to the tune of a 10-win season, and Kiffin believes this group is trending in similar fashion.

“I feel like it’s going the right direction,” Kiffin said. “We’ve had some really great speakers, the kind of people who have been here before and know our players and just come and hang around for the day. They’ve kind of helped with that. I feel like that’s going well. We’ve gotten really good buy-in from guys.”

ANOTHER CHANCE
One of the key pieces to the transfer portal puzzle a season ago was linebacker Chance Campbell. Campbell transferred to Ole Miss from Maryland and quickly assumed a leadership role on and off the field. He not only helped the defense form into one of the most successful units in recent program history, but he led the team in tackles along the way.

With Campbell on to the NFL, the Rebels brought in another potential leader for the middle of the defense, Troy Brown. Brown earned First Team All-MAC honors a season ago, leading Central Michigan with 121 tackles on the season, including 24 for a loss and 10 sacks. Looking back and what Campbell did in before him, Brown is ready to lead the 2022 linebacker corps just like Campbell in 2021.

“I watched a lot of film on Chance. When I came here, a lot of guys talked heavy and were very proud of his character and the way he practiced. So I just try to bring some of those characteristics to have everybody buy into me just like I’m buying into them, so they can have trust in me like they did him last year. I’m trying to do some of the same things.”

With Brown leading the way, the linebacker group is progressing as expected. The senior out of Flint, Michigan, will be joined by a pair of key returners in senior Ashanti Cistrunk and sophomore Austin Keys, not to mention fellow transfer Khari Coleman out of TCU. All in all, Brown has been pleased with what he’s seen out of his teammates in recent weeks.

“Us as a unit, the linebacker group, we’re coming along,” Brown said. “Not just me and the freshmen, but guys are being very consistent and stepping up to the plate and are making plays that they didn’t make at the beginning of camp. I feel like we’re making progress, and by the time game time comes, we’re going to be all in-sync.”

Playing alongside proven returners like Cedric Johnson and Tavius Robinson, Ivey has carved out a role along the defensive front and has settled into what looks to be one of the deepest D-line rotations in Oxford in recent memory.

“We’ve got guys everywhere. We’re deep at every position. I can’t wait to be able to showcase that on Saturday,” Ivey said. “My game has adapted a lot. When I first got here, obviously I had to get used to the defense, used to the scheme. After a spring and a good fall camp, I feel like my game has worked its way into what we do here and I’m feeling pretty good about it.”

At 6-foot-5, 265 pounds, Ivey has all the physical tools necessary to be an impact player on the edge, and he has coaches excited about his future.

“He’s done a good job of coming over. Phenomenal length. Has elite height-weight pass rush combination for that length,” Kiffin said. “We’ve just been fitting him in. He’s still a young player so he’s got a really bright future.”