No. 18 Ole Miss soccer tops No. 22 Memphis behind three-goal second half 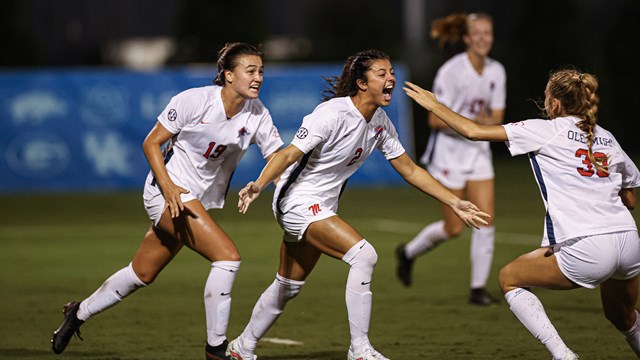 Playing in just her second match in a Rebel kit, it was LSU transfer Molly Thompson who scored the winner, bagging a headed goal midway through the second half. Goals from Sydney Michalak and Ramsey Davis followed shortly after to ice the victory.

The Rebels came out strong in the first half, dominating possession in the early minutes. However, Memphis started to settle in as the period wore on and both teams settled for a 0-0 score line heading into halftime.

Ole Miss had to weather an early storm from the Tigers to keep the score deadlocked, with Ashley Orkus twice denying Momo Nakao from close range in the 52nd minute before Nakao’s third attempt at goal was cleared off the line.

Behind that momentum, Thompson gave the Rebels the lead in the 62nd minute, rising high to meet Taylor Radecki’s corner kick delivery and cushioning the ball into the near post corner to make it 1-0.

Just two minutes later, Michalak picked off a pass at midfield and went on a dazzling run down the sideline before cutting in, beating several defenders and firing a shot into the back of the net, doubling the advantage.

Davis put the match on ice in the 81st minute, tapping in from close range off of a feed from Marykate McGuire, sending the sideline and the Rebel faithful into a frenzy.

With two home wins in the bank, Ole Miss hits the road for the first time this season for a pair of matches next week, taking on Middle Tennessee on Thursday and Samford on Sunday.Ril