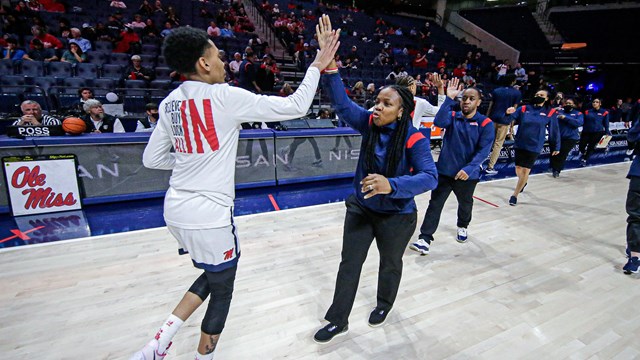 Ole Miss head coach Yolett McPhee-McCuin was named to The Athletic‘s “40 Under 40” list of up-and-coming stars in the college sports world on Tuesday—becoming the only women’s basketball coach to make the outlet’s inaugural list.

The list recognizes rising coaches, players, administrators and support staff from within the college ranks who are bringing a fresh perspective to their respective positions.

McPhee-McCuin, who turned 40 in April, led the Rebels to a 23-9 record and their first NCAA tournament appearance in 15 years last season—her fourth at the helm for Ole Miss.

She is the first Black female head coach for Ole Miss women’s basketball, and also became the first woman to coach for the Bahamas men’s senior national team this summer when she served as an assistant coach for the team’s World Cup qualifiers.

The Rebels reloaded this offseason following the departure of superstar center Shakira Austin, who was selected third overall in the 2022 WNBA draft, as well as guards Lashonda Monk, Mimi Reid and Donetta Johnson.