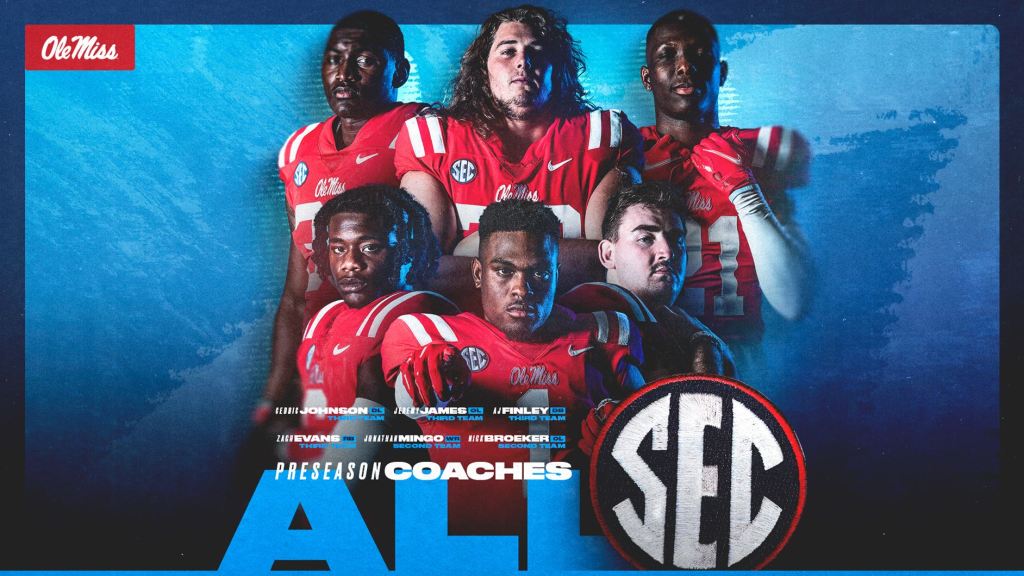 Broeker, also a preseason All-America selection by Athlon Sports, is a multi-year starter for the Rebels who has yet to miss a game in his collegiate career. He started all 13 games at left tackle in 2021, playing in nearly all offensive snaps (927). The senior allowed just two sacks in 497 pass blocking snaps.

The Springfield, Illinois, native was also awarded with the J. Richard Price Courage and Compassion Award at the end of spring practice, given annually to the senior lineman who, in the opinion of his coaches, has demonstrated extraordinary courage and unusual compassion in his dedication to his team and to Ole Miss.

Mingo, a three-year letterwinner from Brandon, Mississippi, was sidelined over half the season in 2021 due to a broken foot in practice following the third week of the season. He tallied six starts at wide receiver last year and finished fourth on the team in receiving yards (346) and third in TD receptions (3).

Mingo leads all returning receivers with 26 total starts, hauling in 61 catches for 897 yards and seven touchdowns over his three years in a Rebel uniform.

Evans, a transfer running back from TCU, led the Horned Frogs in rushing yards (648) last season despite only playing in six games. The Houston, Texas, native averaged 7.0 yards per rush with five touchdowns before sidelined for most of the remaining portion of the season due to injury. For his career, Evans has averaged 7.3 yards per carry on nearly 150 rushing attempts.

247Sports rated Evans as the No. 2 running back and No. 8 overall player in the transfer portal this offseason. Since 2020, Evans leads all Power Five running backs in yards after contact per attempt (4.8).

James graded out as Ole Miss’ best offensive lineman last season, securing a grade of 75.9 throughout the 2021 campaign, according to Pro Football Focus. Last season, the junior helped pave the way for the sixth-ranked total offense (492.5) in the country, as well as the No. 12 rushing offense (217.6). James has started every game over the last two seasons on the right side of the line, but is slated to move to left tackle for 2022.

Finley was selected to this year’s Athlon Sports and Phil Steele Preseason All-SEC teams after a strong junior campaign in 2021. He appeared in 13 games, including 12 starts at safety, leading the team with three interceptions. Finley also paced all Rebel defensive backs with 91 tackles and was third on the team with four pass breakups.

Johnson was also named to the Preseason All-SEC team by Athlon Sports and Phil Steele, in addition to a nod to Bruce Feldman’s Top 50 Freaks list. The junior out of Mobile, Alabama, appeared in 13 games as a sophomore, starting 11 at defensive end. Johnson finished the 2021 campaign with 33 tackles, including 8.0 for a loss and was second on the team with 6.5 sacks.