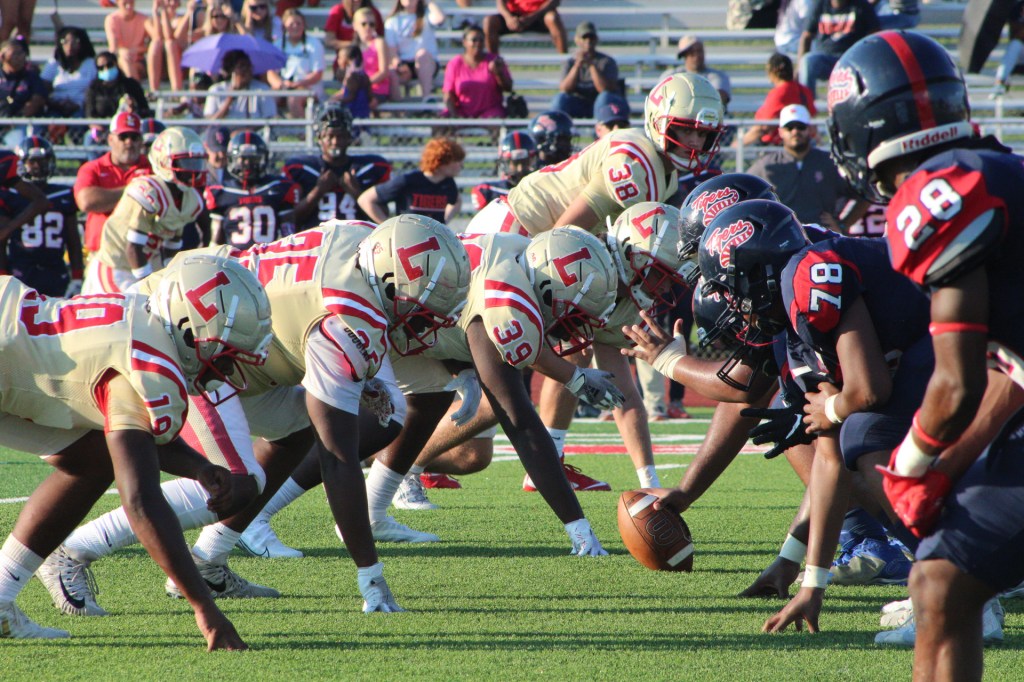 Lafayette's defense lines up against South Panola during the Commodores' Jamboree loss on Friday. (Jamiya Freelon/CMG)

It is a season of change for Lafayette High School’s football program and despite it being head coach Micheal Fair’s seventh season it still feels brand new.

The Commodores are experiencing changes within the coaching staff as well as changes on the field, losing key players and tasked with trying to fill the gaps.

This all while trying to climb back into a state championship game appearance for the first time since 2016.

“Each team and each offseason has its own identity,” Fair said. “So you really never, in my opinion, get a chance to feel like I’ve been here and done this before. Whether it’s bringing a new coordinator in or whatever. There’s so much that goes into the offseason and each team has its own identity. …It’s year seven but in a lot of ways it feels like year one all over again.”

In the center of all that change is some stability and consistency atop the offense with Charlie Fair returning as the Commodores quarterback.

Tyrus Williams was set to be the man under center last season but a season-ending injury thrusted Fair into the position early into the 2021 campaign. In a trial by fire season Fair finished with nearly 1,300 passing yards and 11 touchdown passes.

Having that unexpected season of experience his sophomore year Fair is more composed and prepared heading into this fall.

The offense continues to find stability with senior Jay Reed ready to put a cap on his Commodore career as one of the best running backs to come through the program.

Reed led all Commodores rushers with 1,412 yards and 13 touchdowns last season and the expectations for this year are the same, if not higher.

“(Reed’s) been so much fun to coach because he’s a good young man and a strong leader for us,” Fair said. “He has just got that level of consistency where you know you’re going to get his best every Friday night and we’ve seen that for however many games we’ve played these last two years. He has been the guy, he’s been the bell cow.”

Changes for the offense occur on the outside where Lafayette loses its top three receivers from a season ago in Kylan Vaughn, Cooper Mitze and Ky Woodall.

The Commodores have a crop of younger receivers that were waiting in the wings for their moment. That moment is now this season

“It was their turn and most of them were sophomores last year,” Fair said. “That’s what programs do and we’ll see if they’re going to answer the bell or not, but it’s their turn.”

On defense the task is harder with Mario Wilbourn and D.J. Burgess no longer swarming opposing quarterbacks. The pair combined for 218 of the Commodores 890 tackles last season.

There is still plenty returning for the Commodore defense and will begin with Kylan Egerson who finished with 75 tackles behind Burgess and Wilbourn in 2021.

Other players will be asked to step up, but Fair is more than confident in the 11 he sends out on defense every Friday night.

“We looked over there and we got somewhere around nine seniors starting on our defense right now,” Fair said. “So we’re talking about kids who’ve been through our program, who have played with or behind some great players. We feel like all three levels we’ve got some seniors who have been in some big games and through some battles with us.”

On the sidelines and in the pressbox is where more change took place with the departure of Carter Norris and Matt McCrory. Norris is now the head coach at Senatobia, replacing Brooks Oakley who departed for the same position at South Panola. McCrory moved to Grenada and stepped away from coaching.

“It’s been a challenge, but it’s been one that’s been rewarding,” Fair said. “Because the folks we’ve brought in are dynamic people and great leaders. Really, really good at what they do. Just feeling like we’re just adding to the foundation that’s already here for years.”

Lafayette kicks off its season at Tupelo on Friday at 7:30 p.m..