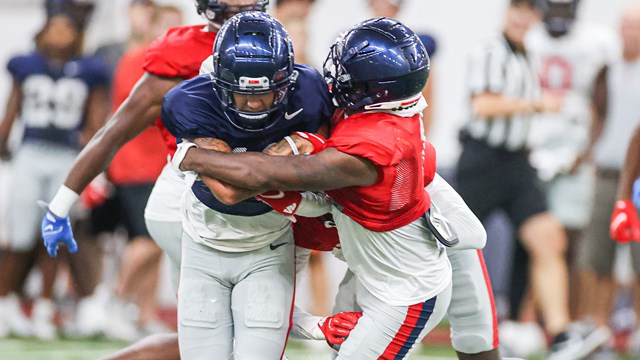 Ole Miss entered their third week of fall camp on Monday as they continue to gear up for their regular season-opener against Troy on Sept. 3. (Ole Miss Athletics)

The Ole Miss football team has officially switched to game mode on the practice fields outside of Vaught-Hemingway Stadium, as the Rebels have begun prep for their 2022 season opener against Troy on Sept. 3.

Cedric Johnson, Deantre Prince and Jordan Watkins met with the media Wednesday to break down the team’s mindset and preparation for next weekend.

CED TO SINGLE DIGITS
The Ole Miss defensive line has looked a bit different the last two days, featuring a No. 2 coming off the edge. No, the Rebels haven’t added another transfer into the fold—just a simple number change for their top pass rusher, Cedric Johnson.

Johnson made the move from No. 33 to No. 2, securing an always-coveted single-digit number. Sam Williams made a similar switch around this time last year, going from No. 13 to No. 7, and he followed it up with one of the best individual seasons by a defensive lineman in program history.

“My brother, he used to have No. 2 for the longest time, so I say that number is from him,” Johnson said. “But I obviously wanted a single digit. Sam last year, he had a big year after he switched, so I’m looking forward to doing the same thing.”

The junior out of Mobile, Alabama, has long been the presumptive heir to Williams’ throne on the defensive front, even before Williams played his last collegiate snap. Johnson was just behind Williams with 6.5 sacks a season ago, and though he’s ready to take on the role as the team’s top pass rusher, he knows he won’t be alone in a loaded defensive line room.

“We’re looking pretty good,” Johnson said. “I’m very confident in all the guys we have, the depth we have. The culture that we’ve built is very solid. I’m looking forward. I’m excited to see what I do, what the other guys do. I think it’s going to be a fun year for us.”

FRESH PRINCE
Deantre Prince will also take the field this season sporting a new number. The Rebel cornerback made the swap from No. 5 to No. 7, taking Williams’ former number. As Prince competes in the coming weeks, he’ll do so carrying with him the number of some of his favorite playmakers growing up.

“Mainly, it was me having a person that’s a role model to me who was No. 7, and that’s Tyrann Mathieu. Back when I was younger, when he was at LSU, Tyrann Mathieu was the one I looked up to the most, and Patrick Peterson also,” Prince said. “I just wanted to be something like those guys and have a part of them on me while I’m representing Ole Miss.”

Prince has certainly shown some Mathieu- and Peterson-esque playmaking ability. The junior out of Charleston, Mississippi, intercepted two passes a season ago, and he has spent this fall doing the same, much to the chagrin of his quarterbacks. After going through fall camp defending pass after pass from both Luke Altmyer and Jaxson Dart, even Prince can’t make the call.

BEST OUT
Ole Miss has 19 wide receivers on its roster as fall camp comes to a close, including five new Division I transfers. With such a deep group, roles in the receiver room are still to be determined, and at this point, they might be up in the air more than any other position.

Jordan Watkins is one of those five Division I transfers, joining the Rebels from Louisville after finishing second among Cardinal receivers with 529 yards a year ago. In a crowded room, the dynamic junior is relying on his versatility in his fight for playing time.

“I said it before coming out of high school, I think of myself as a swiss army knife a little bit, somebody who can do everything—play outside, play slot. At practice, I’ve been everywhere a little bit. I think that’s what sets me apart from a lot of other people is I can play anywhere you need me to. You need me to go to the backfield, I’ll play running back. If you need me to go play tight end, I’ll go play tight end. I think that separates me from a lot of people.”

The more you can do, the more value you bring, and Watkins is one of several receivers bringing great value to the room. He also gave shoutouts to Dayton Wade, JJ Henry, Jonathan Mingo and Malik Heath when asked to identify other swiss army knife-type players.

“There’s a lot. I think D-Wade is one of them. I think JJ Henry is one of them. Mingo is one of them, Malik is one of them who can do everything, play wherever Coach Kiffin or Coach Weis needs us,” Watkins said. “We want to be the best in the country. That’s our standard. I think we can do that with the receivers we have in the room.”