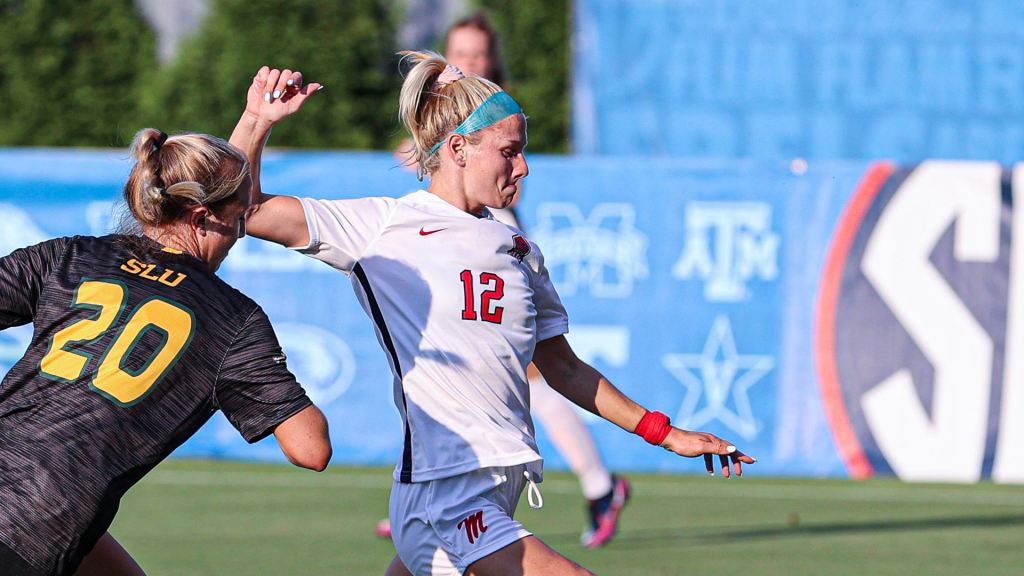 Marykate McGuire played a hand in all four Rebel scores, bagging a brace and dishing out a pair of assists for six points on the night. Mo O’Connor scored her 15th goal in a Rebel kit, also posting an assist.

On the other end, Ashley Orkus and the Rebel defense stretched it’s goalless streak to 270:00 with a third straight clean sheet.

Ole Miss wasted no time getting on the board, talking a 1-0 lead less than five minutes in. Collecting a ball inside the 18, McGuire turned her defender and drove to the endline before sending a square ball across, finding Lauren Montgomery for a tap in with her right foot.

Just a few minutes later, Montgomery returned the favor. Taking a feed from O’Connor, Montgomery took one touch and dished off a through ball to a wide-open McGuire in the center of the 18. McGuire made no mistake of the opportunity, swinging with her left to bulge the net.

With a two-goal lead in two, Ole Miss kept its foot on the gas. In the 21st minute, O’Connor made it 3-0, pouncing on a loose ball in the box and unleashing a wicked strike with her right peg that gave the Blue Raider keeper no chance.

The 3-0 advantage held through the halftime break, and while Ole Miss immediately jumped back on the front foot in the second stanza, it was Middle Tennessee who had an early look as a ball over the top sent the Blue Raiders in on goal. Ashley Orkus came to the rescue, reaching high to paw the ball out to safety.

Not long after, the Rebels were back on the board as McGuire got her second in the 62nd minute. After Aubrey Mister’s volleyed effort was knocked away, the senior’s striker’s instinct kicked in, following up the shot and calmly slotting into the vacated goal.

Comfortably ahead, the Rebels salted away the remaining half hour, keeping their perfect record and shutout streak intact.

Ole Miss remains on the road for Sunday’s match, facing a familiar opponent in Samford. The matchup from Birmingham, Alabama, can be streamed on ESPN+.