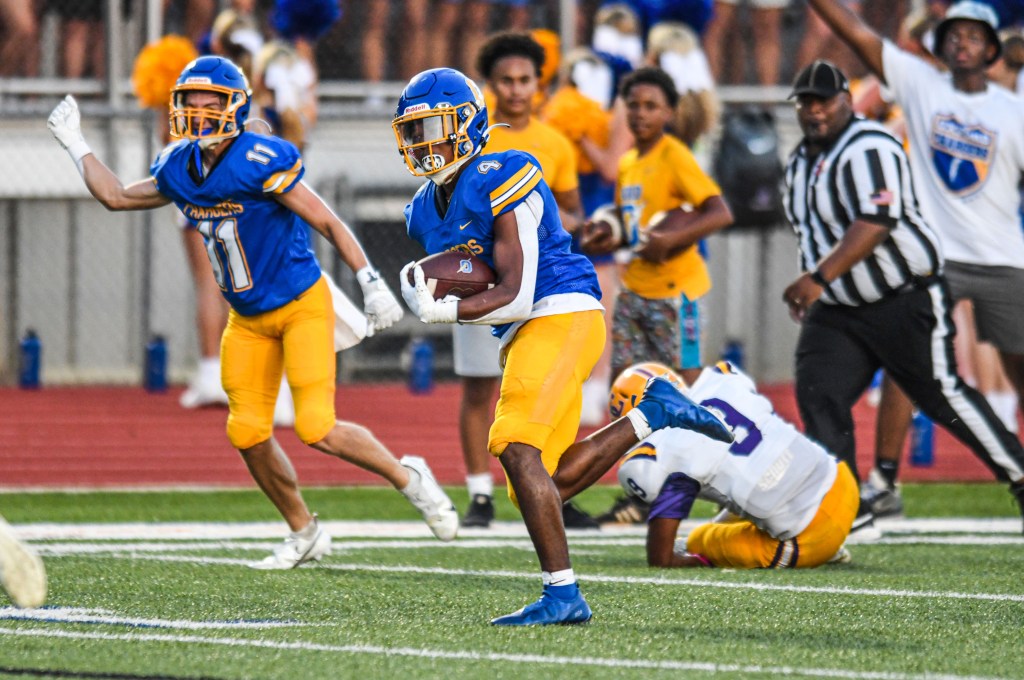 Oxford running back Roman Gregory (4) scores on a pass play vs. Desoto Central in a jamboree at Bobby Holcomb Field in Oxford, Miss. on Friday, August 19, 2022. (©Bruce Newman)

Get ready for some fireworks.

Oxford football is primed and ready for the 2022 season, and expectations are higher than ever for the Chargers following the addition of transfer quarterback Mack Howard.

The three-star quarterback led Heritage Academy to a MAIS Class 5A championship last season, and will look to flex his muscles at the 6A level this year.

He will have plenty of weapons at his disposal in Oxford, as the Chargers return star running back Roman Gregory as well as a deep wide receiver room full of potential targets.

Gregory led the team with over 1,000 yards on the ground last season—racking up 1,554 all-purpose yards in 12 games.

He is joined in the backfield by fellow senior Jaidyn Young as well as junior Jay Brown, who provide quality depth behind Gregory following the departure of Omar Howell.

The Chargers recorded over 140 rushing yards per game last season, but head coach Chris Cutcliffe says he envisions a more balanced attack in 2022 with Howard under center.

That balance will hinge on the ability of Oxford’s undersized offensive line to control the line of scrimmage and prevent opponents from getting into the backfield.

The rest of the line will be a work in progress, with as many as 10 players expected to contribute early in the season.

Cutcliffe is confident that the veteran trio will help set the tone on the offensive line however, saying their connectedness as a group will translate to success on the field.

“We’ve got some young guys we’re excited about and we’ve got some competitions in some different spots, so I think this group will be a strong group.” Cutcliffe said. “I think they do a great job of being a unit, right, and being a group, and I think it’s gonna give them a chance to be successful.”

The real question for Oxford on offense is who will step up as the favorite target for Howard.

Senior Cashe Shows is the obvious favorite, but junior Zae Lewis excelled in the Chargers’ spring game and continued to turn heads throughout the summer.

Cutcliffe says he wants to rotate through plenty of bodies in order to keep fresh legs on the field at all times, so fans are likely to see a variety of receivers in any given game, but keep an eye out for Shows, Lewis or tight end Jack Harper establishing themselves as Howard’s security blanket later in the season.

On the other side of the ball, Oxford returns several key players who provide veteran experience in each position group.

Senior Alex Sanford is the undisputed anchor of the defense, providing a physical presence in the run game from his middle linebacker position. The Arkansas commit highlights a talented linebacker corps that also features outside linebackers Martavis Blackmon and Ty Cohran.

Senior defensive end Malaki Pegues leads a strong group of down lineman who should be effective at getting into the backfield and stopping the run. He lines up alongside fellow senior Jaheim Jones and nose guard Montaine Bonner.

In the secondary, the Chargers feature senior cornerback Ryan Kirkwood, who headlines a secondary unit full of potential contributors.

The lockdown corner is joined in the secondary by junior corner Ken Herron as well as senior safeties Lucian Giles and Tyree Young.

Oxford faces a daunting Region 2-6A schedule in 2022 that features matchups with 6A contenders Brandon, Starkville, Clinton and Madison Central, but the Chargers hope their high-flying offense paired with an improved defense is enough to get them back to the state championship game for the third time in the last four years.