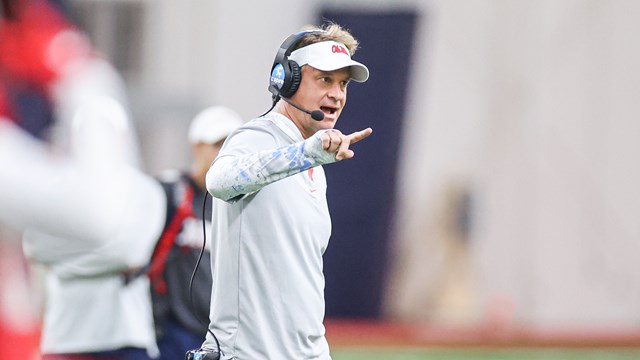 Ole Miss continues to prep for the upcoming season as the fall semester gets underway. The Rebels open their regular season at home against Troy on Sept. 3. (Ole Miss Athletics)

The college football season is finally upon us.

After over 200 days without live action on the gridiron, teams are gearing up for the 2022 season after a tumultuous offseason that featured several coaching changes, a flurry of transfer portal activity and a not-so-private spat between two old co-workers.

The Rebels signed the No. 2 transfer class this offseason to replace their NFL-bound stars—and now a new group of talented playmakers is eager to kick off the season with a bang as Ole Miss plays host to Troy in their regular-season opener.

The Trojans are coming off three straight 5-7 seasons in the Sun Belt conference, but expectations are higher this year as first-time head coach Jon Sumrall takes over following three seasons on Mark Stoops’s staff at Kentucky.

Sumrall, who also spent one year as a linebackers coach for Ole Miss back in 2o18, is regarded as one of the top defensive recruiters in the country and already has a proven track record of developing talent in the front seven.

The Huntsville, Alabama native has a strong foundation to work with at Troy as well.

The Trojans boast one of the top linebacking corps in the Group of Five—headlined by 2021 honorable mention All-American Carlton Martial.

The physical run-stopper came 17 tackles shy of breaking the single-season Sun Belt conference record last year, and now returns for a fifth season in 2022 as he chases the all-time FBS record for career tackles.

He is joined at linebacker by senior K.J. Robertson and junior Jayden McDonald.

Robertson, a two-time All-Sun Belt Honorable Mention honoree, is a physical tackler on the weak side who also excels in pass coverage. He posted the highest tackle grade of any Group of Five linebacker in 2020 according to Pro Football Focus, and missed just six tackles in 2021 despite playing in three different positions for the Trojans over the course of the season.

McDonald, who transferred to Troy from Iowa in 2019, is an explosive athlete who excels at getting off his block quickly and wreaking havoc in opposing backfields. He was rated as the No. 7 pass-rush linebacker in the country in 2020 according to PFF, and was rated as the second-best run-stopper for the Trojans in 2021 before his season was cut short due to a season-ending ankle injury suffered against Coastal Carolina on Oct. 28.

Ole Miss may get more than it bargained for from the Trojans’ star-studded linebacker group, but the Rebels should have more than enough speed and talent to spread the defense and neutralize their impact.

Lane Kiffin and company are 21.5-point favorites in Saturday’s contest, which marks just the second meeting all-time between the two schools. Expect the Rebels to take care of business, but don’t be surprised if they aren’t quite able to cover the spread with a host of new faces in key positions.

Kickoff is scheduled for 3 p.m. at Vaught-Hemingway Stadium. The game will be available on SEC Network and the Ole Miss Radio Network.