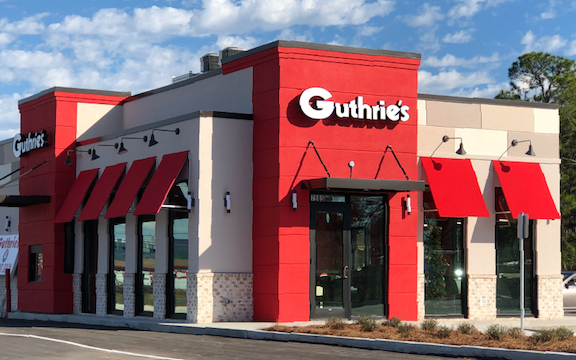 Guthrie’s, the chicken-finger only restaurant pioneer, announced that its first restaurant in Oxford is now open at 1506 University Avenue. As the first restaurant in the country to build a menu only around scratch-made chicken fingers, the new Oxford location is owned and operated by Tyrone Burroughs and Randy Washburn, who also operate two additional Guthrie’s restaurant in Memphis,  and have plans to open a third and fourth Guthrie’s in Collierville and Olive Branch over the next several months.

“The timing was just right and in light of everything we’ve gone through as a community over the last several years, we are so excited to offer Oxford residents, families and visitors a chance to experience the absolute best chicken fingers in the world,” said Guthrie’s Oxford Co-Owner Tyrone Burroughs. “We’re chicken finger and fries loving locals that will live and breathe Oxford. From families to workers, little league teams, late night snackers, Ole Miss students and staff, or anyone craving authentic made-to-order chicken fingers and sides – we’ve got you covered at Guthrie’s. And our signature Guthrie’s sauce – well, it’s just a game changer.”

For more than 50 years, Guthrie’s has drawn in crowds across the country for its hand-breaded chicken fingers rooted in a tradition of fresh, hot, and fast, with a generous dash of southern hospitality. Rounding out Guthrie’s simple, yet classic menu is hand-chopped coleslaw, crinkle cut French fries, Texas toast and its signature dipping sauce. Guthrie’s history across the South spans generations. To this day, it remains a family run restaurant business that uses freshly sourced products and ingredients to create its vibrant, yet simple menu. Since its inception in 1965, Guthrie’s has become famous for its unique take on chicken fingers and down-home food. Furthermore, the brand’s software, hardware, training, and ongoing support and national marketing efforts allows Guthrie’s owners to focus on producing an exceptional product without sacrificing consistency, freshness, and quality. With one foot anchored in tradition and the other firmly planted in the future, Guthrie’s has spread to six states and more than 40 locations

“There is something simple, something quintessential about Guthrie’s golden fried chicken fingers that everyone can relate to – it’s very strong and powerful,” said Guthrie’s Oxford Co-Owner Washburn. “We’ve remained true to who we are since the original Guthrie’s opened in Haleyville, Ala. and then expanded into the very first chicken fingers-only restaurant in Auburn. While many have copied our approach, we’re still evolving as a restaurant brand even though our menu hasn’t changed. We’re going to be a big part of the Oxford community and the surrounding region and have already signed on as a Proud Partner of Ole Miss Athletics. We know that everyone is going to love the freshness and speed of service that families and friends have come to enjoy for generations.”

Guthrie’s was founded in Haleyville, Ala. in 1965 and, with the launch of its first chicken fingers only restaurant in Auburn, Ala. in 1982, the brand has grown to more than 40 locations across six states. Guthrie’s is dedicated to a simple, yet complex single menu-item format using only the highest quality and freshest ingredients in Fast Casual. This allows franchisees to honor tradition while simultaneously disrupting typical menu diversification to create better opportunities for growth and profitability.