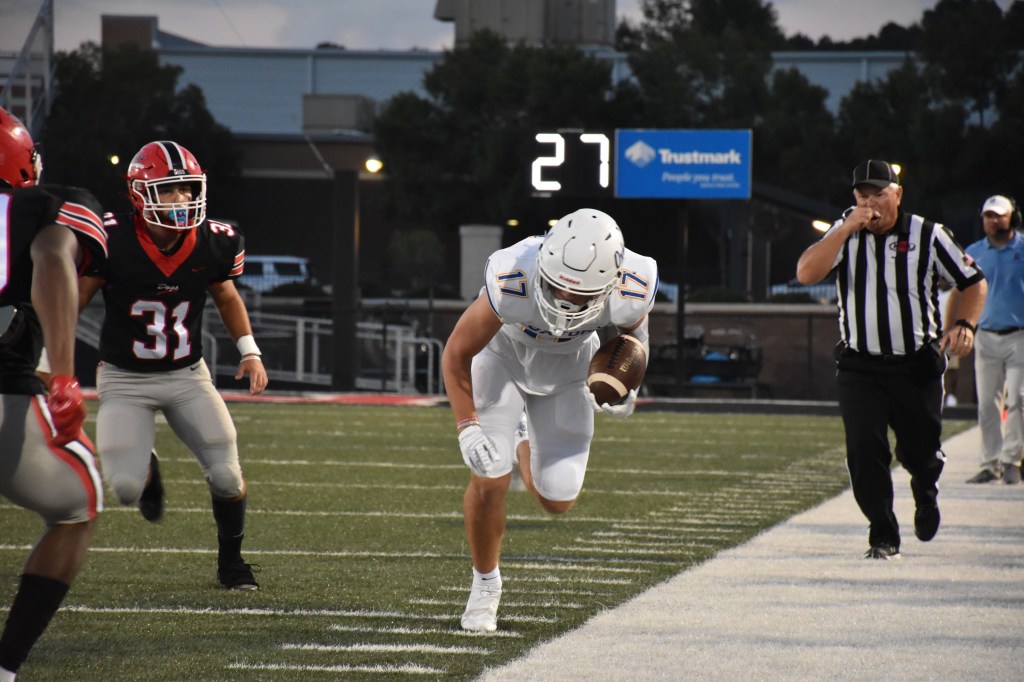 Oxford's Jack Harper catches a pass along the sideline during the Chargers' 45-14 loss to Brandon on Friday, Aug. 26. (Jared Redding)

Oxford football did not get off to the start it wanted.

The Chargers fell 45-14 to Brandon on the road last week in a matchup between two of the top contenders in 6A, and now look to get back on track as they play host to South Panola in their first home game of the season.

Head coach Chris Cutcliffe said the biggest area of emphasis for his team following last week’s loss is limiting the explosive plays that allowed Brandon to build up a sizable lead.

“It was too many explosive plays allowed defensively,” Cutcliffe said. “We gave up 18 plays for 430 yards and the other 50 plays of the game they had 89 yards so we’ve got to find a way to limit those explosive plays.”

Quarterback Mack Howard will be back under center for the Chargers after missing the final quarter of last week’s game due to an injured right shoulder.

The Utah commit completed 12 of his 20 attempts through the air for 110 yards, one touchdown and one interception before going down with the injury.

“I think he did a good job of taking what the defense gave us—which was some more of the underneath passing game, but offensively we just struggled to finish drives,” Cutcliffe said. “There were too many negative yardage plays and too many offensive penalties—I think we had seven offensive penalties and 12 negative yardage plays and those things kill drives.”

Oxford will have their hands full once again this week as they face a talented South Panola team that features an explosive offensive full of dynamic playmakers.

First-year head coach Brooks Oakley steps into an unenviable position as the successor to legendary head coach Ricky Woods, but the former Senatobia head man takes over a talented group of players on offense that are capable of running up the score quickly.

The Tigers are led by senior quarterback David Hubbard, who threw for 1,560 yards and 18 touchdowns in 10 games last season. The dual-threat signal-caller also added two more scores on the ground last year, and will be tough to contain given his elite speed and arm strength.

The two combined for over 1,200 yards and 15 touchdowns on the ground last season, and will be asked to carry even more of the load this year after the departure of fellow backs Damarion Shaw and Seandun Clark.

“I think South Panola is talented across the board,” Cutcliffe said. “They’re balanced offensively because they have those talented backs but their quarterback and receivers are good players as well so we have to be balanced defensively.”

Oxford will also be at a disadvantage in terms of preparation, as they will be without extensive film of South Panola’s offense after the Tigers had a bye in week one.

“We have some from their Jamboree and that sort of thing but it’s not a real game so it is a little bit different,” Cutcliffe said. “In these early season games though our focus is on is on us and trying to improve our team and trying to play as high level as we can. We’ve got to do an excellent job of consistent execution for four quarters.”

Oxford will play host to the Tigers at 7:00 p.m. on Friday at Bobby Holcomb Field.