Ole Miss football practice report: one down, 11 to go 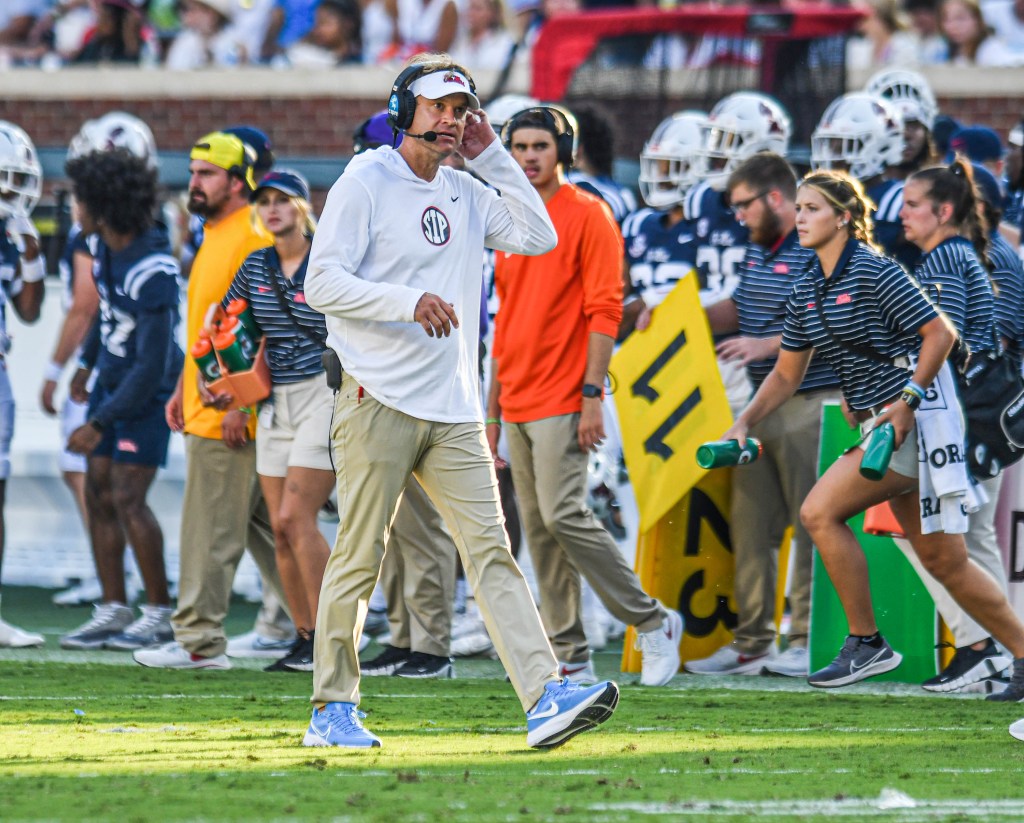 The Ole Miss football team is 1-0 after securing a 28-10 victory over Troy to open the season. Now, the Rebels look to double their win total when they welcome Central Arkansas to Vaught-Hemingway Stadium on Saturday at 6 p.m. CT on SEC Network+ and ESPN+.

Head coach Lane Kiffin, defensive lineman KD Hill, receiver Dayton Wade and offensive lineman Eli Acker met with the media on Monday and Tuesday to break down their efforts in the win and preview the Rebels’ next text.

UNPACKING THE WIN
It was a tale of two halves to open the season as the Rebels ran out to a 21-3 halftime lead over Troy and quickly expanded that lead to 28-3 early in the third quarter. However, three halftime turnovers slowed their offensive progress.

After reviewing the tape, Kiffin lamented the second-half turnovers but saw it as a lesson for his young team and an opportunity for growth.

“As you look at things, it’s 28-3, you’ve got two different chances to go up 35-3 and kind of blow the game open and screwed up with the turnover on a missed throw that could’ve been a touchdown and unfortunately didn’t put them away,” Kiffin said. “It’s a good lesson to learn. As we play better teams, we wouldn’t be able to get away with some of the things that happened in the game—especially the three turnovers in one half of football.”

QB ROTATION
With one game down, Kiffin and his staff are still working on designating a starting quarterback for the season. Jaxson Dart got the nod in Week 1, and now Luke Altmyer will have his starting shot in Week 2.

“We’d always like to have it figured out. This is not ideal,” Kiffin said. “Luke Altmyer will go first in this game. So that gives both guys an opportunity to go first. We’ll see how he plays.”

Dart had an up-and-down debut, leading four scoring drives and going 18-for-27 passing with 194 total yards, but his third-quarter interception left the sophomore QB wanting more from his outing. In limited action in relief, Altmyer was 1-for-2 with 13 yards passing.

Kiffin, as well as Dart and Altmyer’s teammates, believe that both QBs are more than capable of leading a lethal offense. However, the Rebel coaching staff will leave no stone unturned as they identify the right man for the job.

“You want to make sure you find the best guys,” Kiffin said. “This is what we think gives us the best chance long-term to win, to evaluate the situation to get the best player. And we still may be wrong after that. It happens all the time.”

WEAR IT WITH PRIDE
Before the opening week of the season, the Rebel football staff had one final award to present to its players: the coveted Chucky Mullins Courage Award, given annually to the upperclassman defensive player that embodies the spirit of Mullins – courage, leadership, perseverance and determination. This year’s winner: KD Hill.

“It’s truly a blessing to be able to wear that number,” Hill said. “It’s an honor and a privilege. It’s something I’ve been working toward since I was a freshman. When I first took my visit here, I learned about this number, and I always told myself I’d get it. It’s just determination and perseverance because it hasn’t been easy on my journey here. I thank God for everything he’s thrown at me because it’s only made me stronger.”

Hill went viral on social media after earning the award when he called his mom to tell her the news. The touching conversation garnered hundreds of thousands of views. For Hill, the call was a sign of a job well done, but not a job done, telling his mother he still has more to accomplish.

“I know the work I put in when no one was watching. I know everything I’ve been through, it was for a reason,” Hill said. “It was just very emotional because my mom was part of that process as well. She trusted in me when no one else did.”