Lafayette comes up short against Southaven to fall to 1-2 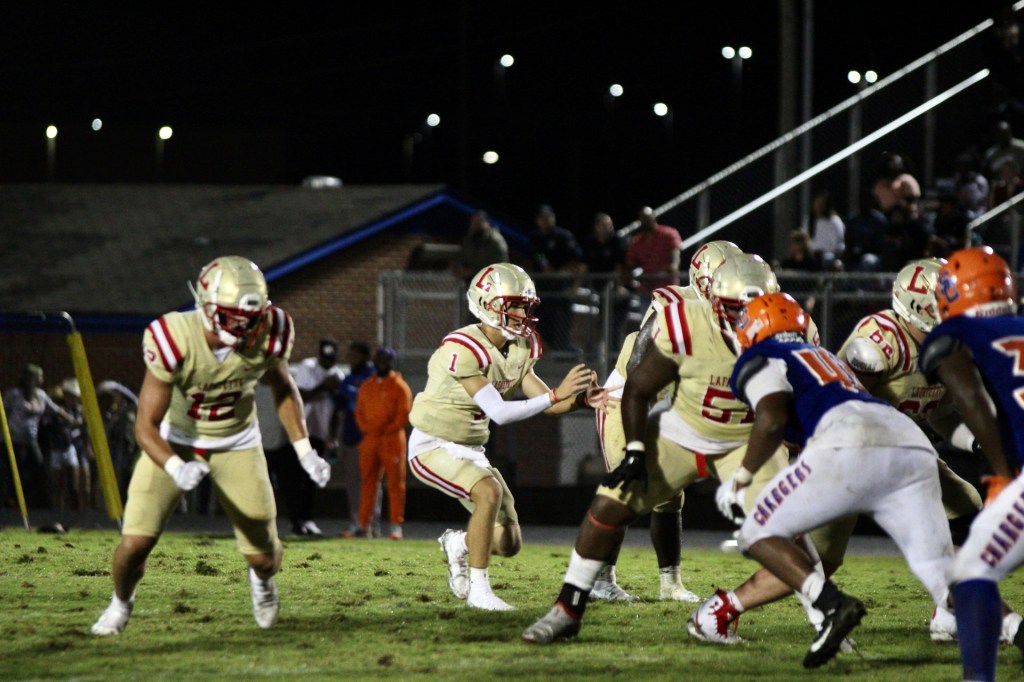 Lafayette's Charlie Fair takes a snap against Southaven in the Commodores' 33-28 loss to the Chargers on Friday. (Claire Anne Pugh/CMG)

Lafayette football came up just short against Southaven on Friday as they fell 33-28 in a back-and-forth contest.

The Commodores struggled to find a consistent offensive rhythm against the Chargers—turning the ball over twice and punting twice in the first half alone.

Running back Jay Reed was the bright spot for Lafayette in the first half as he carried the ball 20 times for 103 yards and a touchdown.

“He’s just such a tough runner—I mean he’s a senior that’s been through games like this before,” head coach Michael Fair said of Reed’s performance. “It sure is nice to have a guy like that in your backfield.”

After battling to a 7-7 tie in the first quarter, the wheels came off for the Commodores in the second as Southaven settled in on both sides of the ball.

First, Lafayette quarterback Charlie Fair sailed a pass over the head of receiver Damariun Gipson right into the hands of Tennessee commit John Slaughter who took it 49 yards to the house.

“It was an RPO and the ball kind of got away from us there,” the senior Fair said when asked about the interception. “That guy’s good for a reason and he took advantage of our mistake.”

The Chargers added to their lead later in the quarter when running back Calvin Williams found the end zone on a 4-yard touchdown rush to make it a 21-7 game.

Lafayette managed to come up with a response just before the half however as Fair found receiver Makyi Reed-Jones on a 25-yard score with 10 seconds remaining in the second to make it a one-possession game.

“You know we’re so young and inexperienced—to watch us respond like that and really gain the momentum against a good football team I thought was huge for us,” said Fair.

The Commodores tied the game immediately after halftime when safety Kylan Egerson returned the second-half kick 74 yards to even the score at 21-21.

They took their first lead of the game moments later as Fair connected with Reed-Jones on a 55-yard catch-and-run for their second touchdown connection of the night.

They were unable to hang onto the lead however as Southaven found the end zone twice in the fourth quarter to retake the lead with just over six minutes remaining.

Needing a touchdown to win the game, Lafayette drove the length of the field to reach the red zone before their drive stalled after a sack and a pair of incompletions.

With just over a minute remaining in a five-point contest, the Commodores had one final chance to take a late lead as they faced 4th and 9 from the 14-yard-line, but Reed-Jones was tackled inches shy of the first-down marker to force a turnover on downs.

“We teach these guys to get past the sticks—catch the ball and come back. I’ll have to watch the film but it was a good-throw-and-catch, we just came up a few inches short it looked like,” Fair said.

The Commodores will attempt to regroup quickly before facing off with Oxford next week in the Crosstown Classic.