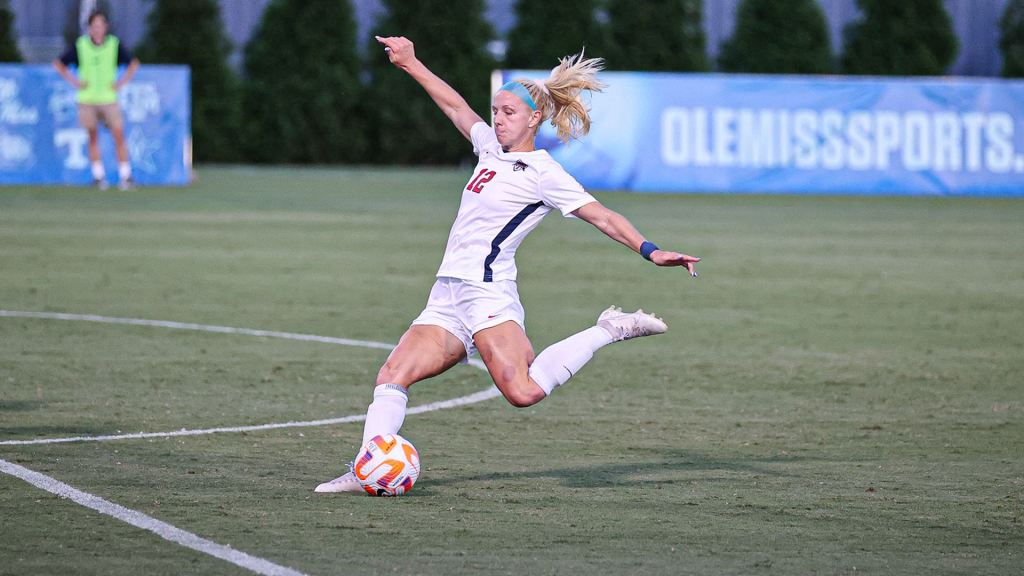 Ole Miss forward Marykate McGuire attempts a shot against Western Kentucky in the Rebels' 2-1 win over the Hilltoppers on Thursday. (Ole Miss Athletics)

No. 9 Ole Miss keeps the win streak alive with a penalty kick goal giving them a 2-1 victory over Western Kentucky.

While the Rebels held possession for most of the first half and had few scoring opportunities, both teams came away tied at the end of one half. Ole Miss shot at the goal twice as many times and took four corner kicks compared to the Lady Toppers’ one in the first 45 minutes of play.

Marykate McGuire, after receiving a pass from Mo O’Connor, made a move to the center of the field and then juked out a defender back to the left for an opening. McGuire broke the stalemate with a left-footed strike past the diving Western Kentucky keeper. The senior forward tallied her fifth goal of the season and O’Connor earned her fourth assist.

The Lady Toppers quickly responded with a goal of their own five minutes later with their only shot of the half.

The Rebels continue to attack the Lady Toppers’ goal, taking eight shots in the second half. Ole Miss’ constant attack led to a Western Kentucky foul inside the eighteen, setting up a penalty kick in the 72nd minute. Price Loposer, called upon to take the kick, nailed the ball to the back of the net. It’s the first career goal for the Ole Miss junior defender.

Ole Miss plays its next game at home in Oxford against Southern Miss at 2 p.m. on Sunday. The match will be available for streaming through SEC Network.