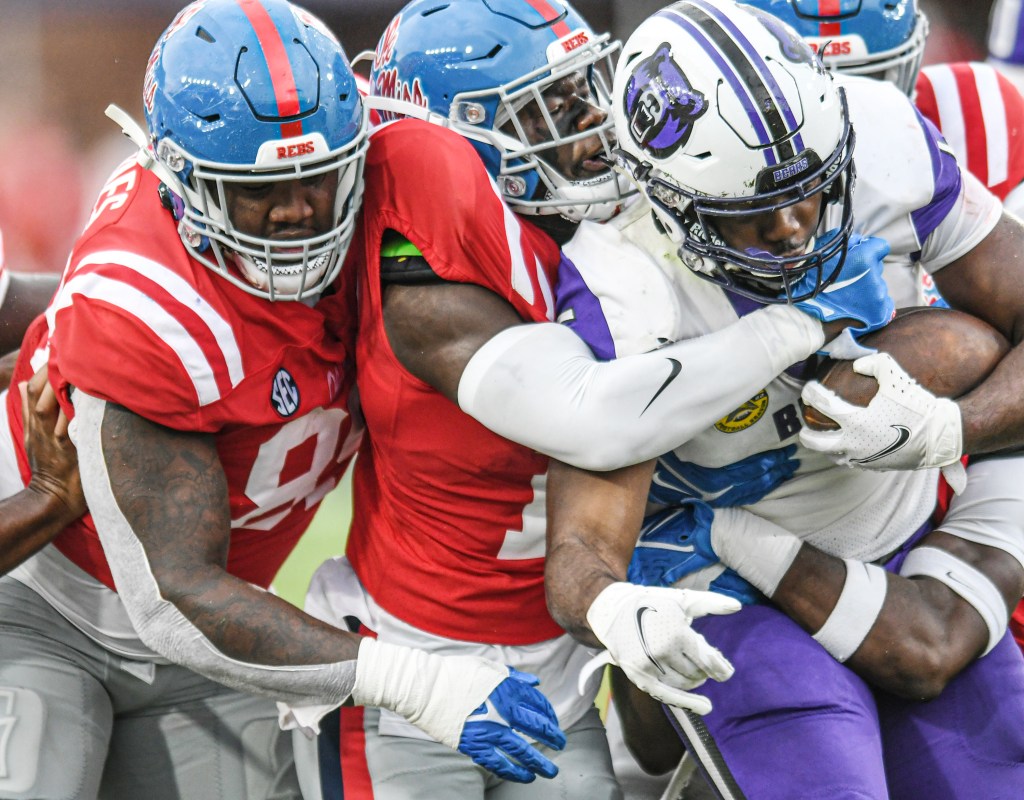 Ole Miss secured their second consecutive victory on Saturday as they steamrolled Central Arkansas in a lopsided blowout.

The Rebels held UCA to just 79 yards of total offense in the first half and 233 yards overall—shutting them down at seemingly every turn en route to a 59-3 blowout.

The new-look defense, which features seven transfers and a true freshman, swarmed to the football on every play and limited the Sugar Bears to minimal yardage.

UCA averaged just 2.19 yards per play in the first half—generating as many rushing yards as penalty yardage as they struggled to find a rhythm against an Ole Miss defense that was bigger, faster and stronger all over the field.

Sophomore quarterback Luke Altmyer drew the first start of his collegiate career in the victory—completing six of his 13 attempts for 90 yards, two touchdowns and an interception in an up-and-down performance.

He started the game by completing six of his first seven attempts, but quickly fell apart in the second quarter as he fired five straight incompletions before being pulled following an interception with 90 seconds remaining in the half.

USC transfer Jaxson Dart took over under center for Ole Miss on the final drive of the half—completing three of five passes for 50 yards and rushing once for seven yards as he drove the Rebels down the field to set up a field goal as time expired in the half.

“I thought he did some good things,” Kiffin said of Dart’s performance. “[He] got us three points on the two-minute drive before the half. He’s doing well.”

The sophomore signal-caller picked up right where he left off after halftime—completing seven of his 10 attempts after the break for 132 yards and two touchdowns as the Rebels ran up the score in the third quarter.

“I just have trust in the guys that are out there and I want to give them a shot anytime it’s a one-on-one or just opportunities like that for a big play,” Dart said. “Tonight they showed their ability to make plays.”

True freshman running back Quinshon Judkins also shined for the Rebels in the victory as he broke the century mark on the ground for the first time in his collegiate career.

The Pike Road, Alabama native rushed for 104 yards on 10 attempts against the Sugar Bears—barreling through defenders and racking up plenty of yards after contact.

“I mean I knew he was special,” Kiffin said when asked if Judkins’s early-season production surprised him “His vision—we knew he was physical—but his vision is really unique.”

Ole Miss will be back in action next week as they head on the road for the first time this season to face off with Georgia Tech at 2:30 p.m.