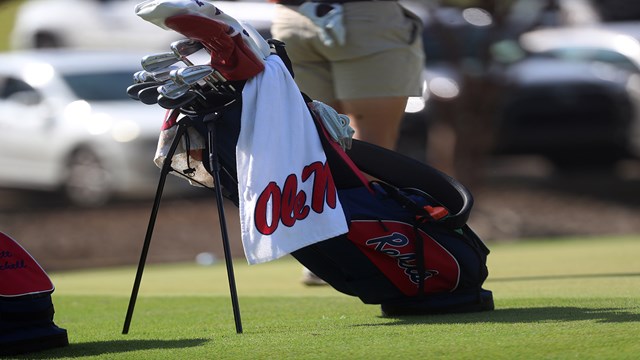 Ole Miss men's golf will kick off their 2022 fall season at the Badger Invitational in Madison, Wisconsin. (Ole Miss Athletics)

MADISON, Wisc. – The Ole Miss men’s golf team will begin its 2022 fall season in Madison, Wisconsin with the team participating in the Badger Invitational hosted by Wisconsin. The Rebels hope to continue their strong play after their historic last season ended at the NCAA Championships.

In 2019 when the Rebels last made their way up to the Badger State, they found success with a third-place finish that was led by Jackson Suber, who shot a final round of 65 (-7) and earned a top-five finish. Sarut Vongchaisit also contributed with a top-10 finish.

THE COURSE
Ranked No. 2 in the nation among the best collegiate golf courses by Golf Pass, the scenic ‘U Ridge’ is a par-72, 7,259-yard course designed by Robert Trent Jones Jr. and features rolling hills and valleys overlooking the city.

THOUGHTS FROM COACH MALLOY
“We are extremely excited to get our season started. We have a lot of new faces in the lineup this week including three freshmen, so that is always nice to see. This will be a great challenge for us as we are getting on different grass in a different climate than we are used to here. I know that the guys will be ready to go Sunday.”

HUGO WITH HIGH RANKS
Grad transfer, Hugo Townsend, enters the Rebels’ lineup with high regard. Townsend was recently named to the 2022 Preseason Haskins Award Watch List. Townsend is one of 25 men’s golfers from around the country to earn the honors, with nine of them attending an SEC university. In August, Townsend finished in the Round of 16 in match play and earned co-medalist honors in stroke play at the 122nd U.S. Open. Townsend finished stroke play at 3-under to earn his co-medalist award tied with three other golfers, marking the highest total of medalists in U.S. Amateur history.

FRESHMEN DOMINATE LINEUP
The signing class of 2022 is making a name for themselves as all three freshmen are debuting at the season-opening tournament for the 2022-23 campaign. All three freshmen were ranked as top recruits from their respective states.

MALLOY HOPING TO KEEP THE MOMENTUM
Entering his ninth season as head coach, Chris Malloy hopes to lean on a promising roster to follow up a deep postseason run in 2021-22. Coming off of last season where the Rebels finished at 14th at the 2022 NCAA Championships in Scottsdale, marking the program’s second-highest team finish at the NCAA Championships.

NEXT ON THE TEE
Following this week’s stint in Madison, the Rebels will turn around and travel to Birmingham, Alabama to begin play in the SEC Match Play Championship (Sep. 25-27).

For updates throughout the tournament, follow the Rebels on Twitter at @OleMissMGolf. Additional updates and information on the team can be found on Instagram at OleMissMGolf, on Facebook at Ole Miss Men’s Golf and on OleMissSports.com.