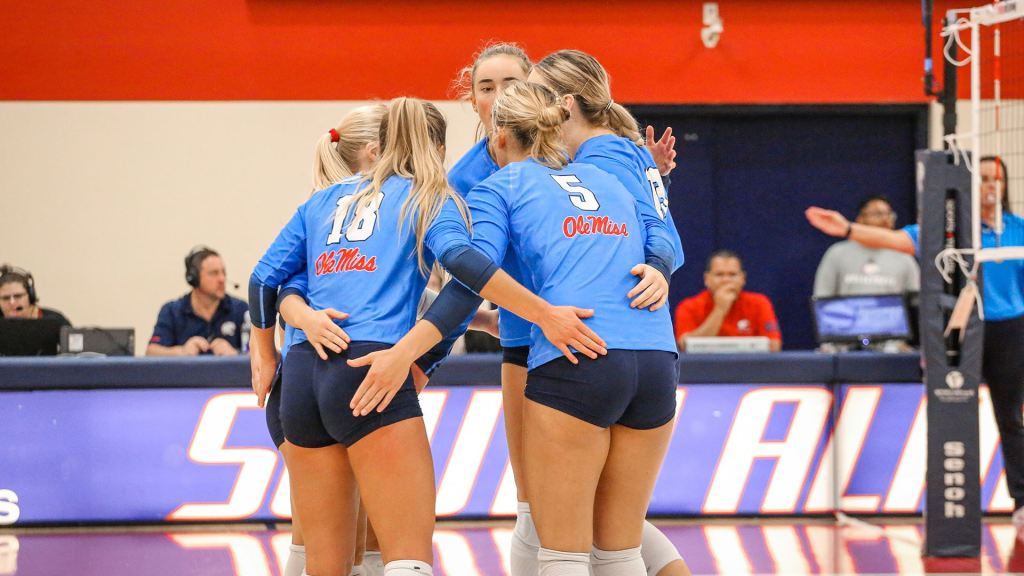 MOBILE, Ala. – Ole Miss volleyball split on day one of the Jaguar Invitational, taking down Florida A&M in straight sets and falling to South Alabama Thursday night inside Jaguar Gym.

Ole Miss got its day started with a 3-0 sweep of Florida A&M. Anna Bair led the Rebels offensively with 17 kills, and Charlotte Rodgers made her first career start, finishing with six kills and three blocks. The defense shined in the victory, as the Rebels blocked nine shots and held FAMU to a mere .092 hitting percentage, the lowest an opposing team has hit all season.

Both teams were evenly matched in the first set, trading punches, but it was the Rebels who came out on top. Payton Brgoch had the hot hand in the middle of the court, slamming down six kills and blocking a pair of shots. Ole Miss finally found breathing room late in the set, using a Bair ace and a Schnitta kill to break a 16-16 tie. With a two-point lead, the Rebels strung together clean attacks to close out the opening set, 25-20.

After settling into the match in the first set, Ole Miss went to work in the second. The Rebels dominated play, outhitting Florida A&M .419 to -.179. Play opened with a 9-2 Rebel run, and they never looked back. Bair was lights out, tallying eight kills in the set alone. Ole Miss slammed the door with five unanswered points to go up 2-0 in the match.

Florida A&M put up a fight in the third set as it looked to extend the match, but Ole Miss rallied to close out the match. The Rebels built up another sizable lead early on, leading by as many as seven; however, the Rattlers responded with a 9-2 run to tie the match at 14 all. From there, both teams battled, needing extra points to decide the set. Rolling with the punches, Ole Miss capitalized on back-to-back errors to take the set and the match at 26-24.

In the nightcap, Ole Miss struggled to fend off South Alabama, getting swept by the Jaguars. The Rebels, who were outhit .198 to .318, just didn’t have any answers for a potent South Alabama attack. Freshman Vivian Miller finished with a team-best and career-high 11 kills.

The Jaguars took a back-and-forth first set, rallying late to capture the momentum. With the match tied at 22, South Alabama scored the final three points to grab the opening set 25-23.

Looking to respond in the second set, Ole Miss held a 15-13 at the media timeout but saw it slip away as the Jaguars went on a 5-0 run. The Rebels clawed their way back to tie the match at 20, but South Alabama found a way to take the set 27-25.

After falling behind 0-2, the Rebels found themselves fighting to stay in the match. They once again held a slight advantage at the media break, but South Alabama quickly tied things up at 19 and went on a 6-1 run to cap off the sweep.

The Rebels close out their non-conference slate Friday at 3 p.m. CT when they take on Eastern Kentucky.