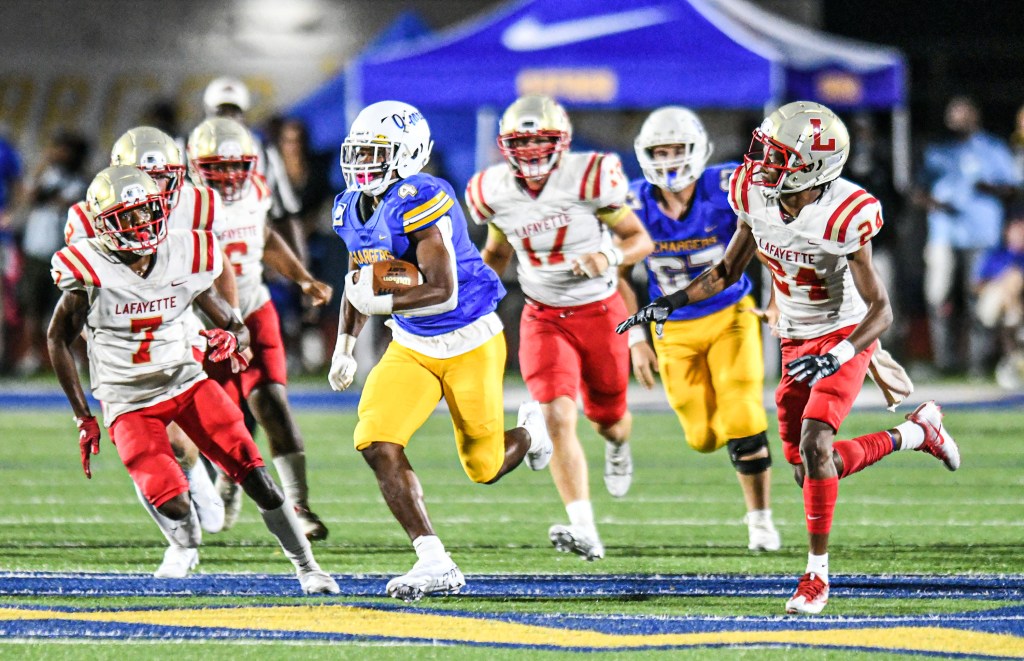 Roman Gregory didn’t even step on the field in the second half.

Oxford’s senior running back got all of his work done before the break—rushing for 102 yards and five touchdowns on 11 carries in the first half as he put the Chargers on his back and carried them to a 43-19 victory over rival Lafayette in the 51st annual Crosstown Classic.

He ripped through the Commodores’ defense time and time again as he set a new career-high with five rushing touchdowns in the half.

“It’s not surprising at all because I see how he works every day and see the preparation that he puts in for these Friday nights,” said Oxford head coach Chris Cutcliffe when asked if he was surprised by Gregory’s scoring outburst. “Roman is an explosive player so every time he touches it he has a chance to take it to the end zone.”

The tailback’s career performance propelled the Chargers to a 36-13 lead after both teams traded blows through the first six minutes of the game.

The mayhem started on the first play from scrimmage as Oxford’s Ashten Shorter coughed up a fumble that gave Lafayette a short field on their first possession of the game.

After Commodore running back Jay Reed found the end zone on a one-yard touchdown rush, the Chargers answered right back with a nine-yard score from Gregory that gave them an 8-6 lead after the two-point conversion.

Lafayette proceeded to turn the ball over on the very next play from scrimmage as a poor snap went sailing over the head of quarterback Charlie Fair and was kicked around multiple times before ending up in the hands of Oxford lineback Tyk Cohran.

Another Gregory touchdown made it 15-6 before Lafayette’s Kylan Egerson ran the ensuing kick back 99 yards to bring the game back within two.

The Chargers were not done however as Gregory broke loose for a 63-yard score on the subsequent drive to extend the lead back out to 22-13.

“I thought our guys managed all that really well,” Cutcliffe said when asked about the chaotic start to the game. “Obviously not pleased with giving up a kickoff return for a touchdown but I thought we managed all that well and played our game.”

The Chargers cruised the rest of the way—coming away with a 43-19 victory to bring the Crosstown Classic trophy back to Oxford for the fifth time in the past seven years.

“Last year—we took a tough loss. We gave up a big lead… this year was just personal. We hate losing to them so it was personal this year,” Gregory said.

Oxford and Lafayette will each kick off region play next week as the Commodores play host to West Point while the Chargers travel to Jackson to take on Murrah.