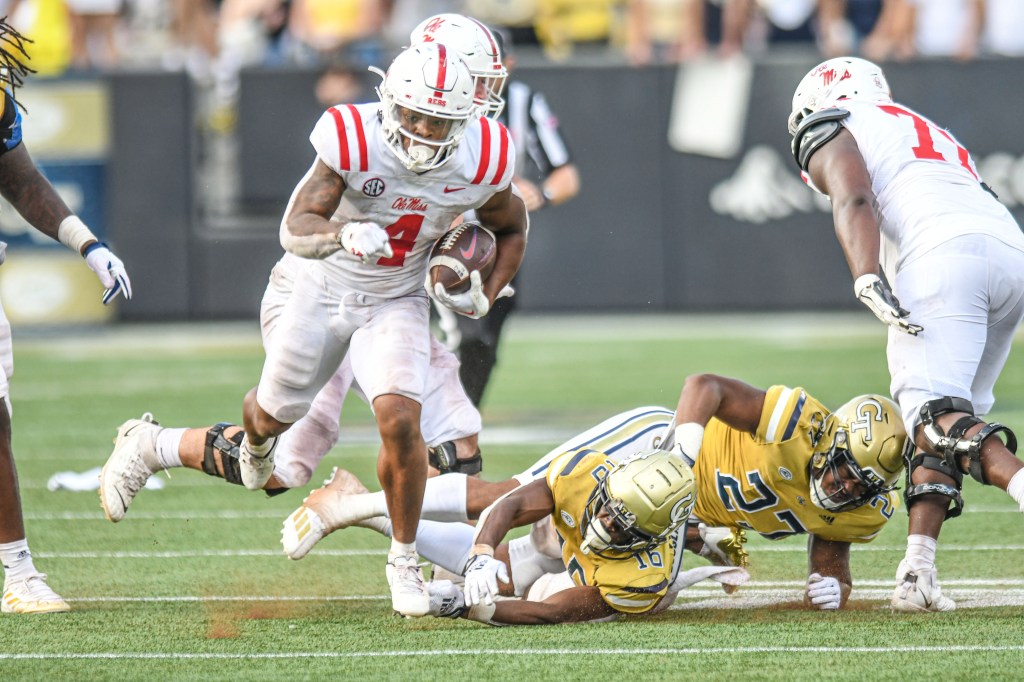 ATLANTA — No. 20 Ole Miss shrugged off its uncertainty at quarterback by running right through Georgia Tech, with Zach Evans and Quinshon Judkins leading a 316-yard pummeling on the ground that carried the Rebels to a 42-0 victory Saturday.

Jaxson Dart returned as the starting quarterback after Luke Altmyer got the nod the previous week.

It really didn’t matter who was taking the snaps. Not the way Ole Miss (3-0) was running the ball.

The game plan was apparent from the very first possession. On third-and-7 from the Georgia Tech 17, Judkins ran for the first down. The freshman then rumbled to the end zone on third-and-goal from the 7.

Ole Miss ran for all six of its touchdowns, averaging 5.1 yards on a staggering 62 carries. Evans had scoring runs of 3 and 26 yards while rushing for 134 yards. Judkins gained 98 yards and also scored twice.

The Ole Miss defense wasn’t too shabby, either. The Rebels held Georgia Tech to 214 yards total offense while sacking Jeff Sims seven times. They have allowed just 13 points on the season, albeit against less-than-stellar opposition.

Dart completed 10 of 16 passes for 207 yards with an interception, doing some of his best work on the ground. He rushed for 40 yards and pretty much delivered the exclamation point to this beatdown by lowering his shoulder to send safety Jaylon King flying at the end of a run late in the third.

Georgia Tech (1-2) turned in a miserable performance in front of the home folks, many of them not bothering to hang around for the second half on a warm, sunny day.

The Yellow Jackets surrendered another blocked punt — their third of the young season — to set up a touchdown that pushed Ole Miss to a 14-0 lead with the game barely 5 minutes old.

Georgia Tech certainly did nothing to relieve the pressure on embattled coach Geoff Collins, who increasingly looks to be winding down his tenure in Atlanta.

Dart, a transfer from Southern Cal, started for the second time. Altmyer got the nod last week, only to be forced out of the game with an upper-body injury.

The injury wasn’t serious, but Dart got all the significant snaps in this one. Altmyer finally came on in the fourth quarter to handle garbage time.

Ole Miss: The defense continues to excel, but it’s hard to tell how much of that is due to the lack of quality opponents. Dart did what was asked of him but will eventually need to show more in the passing game. Ole Miss isn’t going to be able to run like this once it gets to the Southeastern Conference part of its schedule.

Georgia Tech: There are no signs of this program showing improvement in Collins’ fourth season. The Yellow Jackets fell to 10-27 overall and 1-10 against ranked opponents during his tenure. They continue to make the sort of silly mistakes that reflect badly on the coaching staff. Athletic director Todd Stansbury couldn’t miss the boos that poured down on the home team as they trotted off the field at halftime — or that most of the fans were long gone by the time the game ended.