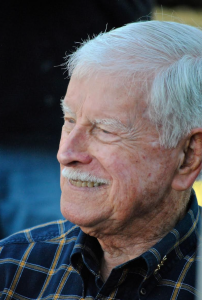 Gerald Alexander Gafford passed away at his home in Oxford, MS September 15, 2022, at the age of 96. The funeral service will be held at Oxford University United Methodist Church on Friday, September 23, 2022, at 10:00 A.M. with visitation one hour before at 9:00 A.M. in the sanctuary of the church. Burial will follow in Salem Cemetery in Etta, MS.

Born in Pinedale, MS to the late Eula Messer and Hulet Sessum Gafford, Gerry graduated from Pinedale High School. Following graduation, he attended Wood Junior College, then Millsaps College as part of the Navy V-12 program where his classmates included Johnny Carson and Zig Zigler. He later attended the University of Oklahoma where he majored in History and Naval Science and Tactics and received his Juris Doctorate from the University of Mississippi.

Gerry practiced law in Oxford, MS for 25 years. During this time, he served as the City Attorney for Oxford, was a member of the American Bar Association, and served on the Mississippi Bar Association’s Board of Commissioners. He was an original founder of the Oxford 4th of July celebration with the first being in the Bicentennial year 1976. He treasured Oxford and worked tirelessly for the betterment of the town and Lafayette County. It was not uncommon to see him driving out-of-towners who stumbled near his law office around the town, showing off what he felt was the greatest place on earth.

Gerry was a veteran of the Korean War and spent 10 years, from 1943-1953, in the Navy. He saw two tours of active duty in Korea as a naval aviator, after receiving his first commission as an Ensign from President Truman at age 19 and in command of his first ship at the age of 20. He joined the U.S. Naval Reserves in 1965 and was very active, supervising Naval Reserve Intelligence Units in Tennessee, Arkansas, and Missouri. One of his proudest accomplishments was being called back to active duty to assist in the debriefing of Vietnam naval prisoners of war, a program known as Operation Homecoming. He wrote the program used in training reservists and active-duty personnel who were to be debriefers. He retired from the reserves with the rank of Captain.

He was very active in the Mississippi Republican Party, attending multiple National Conventions as a member of the State Executive Committee, or as a delegate. He was appointed as Mississippi’s first State Inspector General in 1991. Gerry was a past president of the Rotary Club of Oxford, a Paul Harris Fellow, and later served as the District Governor for Rotary District 6800.  He lived the Rotary motto of Service Above Self and had a passion for helping others. He never met a stranger, and his door was always open. One of his finest qualities was that he made time for anyone who needed him.

He was a faithful and longtime member of Oxford University United Methodist Church. He served in many capacities including Sunday School teacher, member of the Administrative Board, member of the Finance Committee, lay speaker, and member of the Staff Parish Committee.

In addition to his parents, Gerry was preceded in death by his sister, Mavour Ruth Papasan and brother, Hulet Gafford.

The family would like to thank Kindred Hospice for their love and care for Gerry, along with Nicole Wilson, Janice Davis, Shannon Garron, Latisha Cox, and Willie Owens. They have truly been a blessing.

Memorial contributions in Gerry’s honor can be made to Oxford University United Methodist Church, 424 South 10th Street, Oxford, MS 38655, or online at ouumc.org/giving or to the Rotary Club of Oxford, P.O. Box 2501, Oxford, MS 38655.