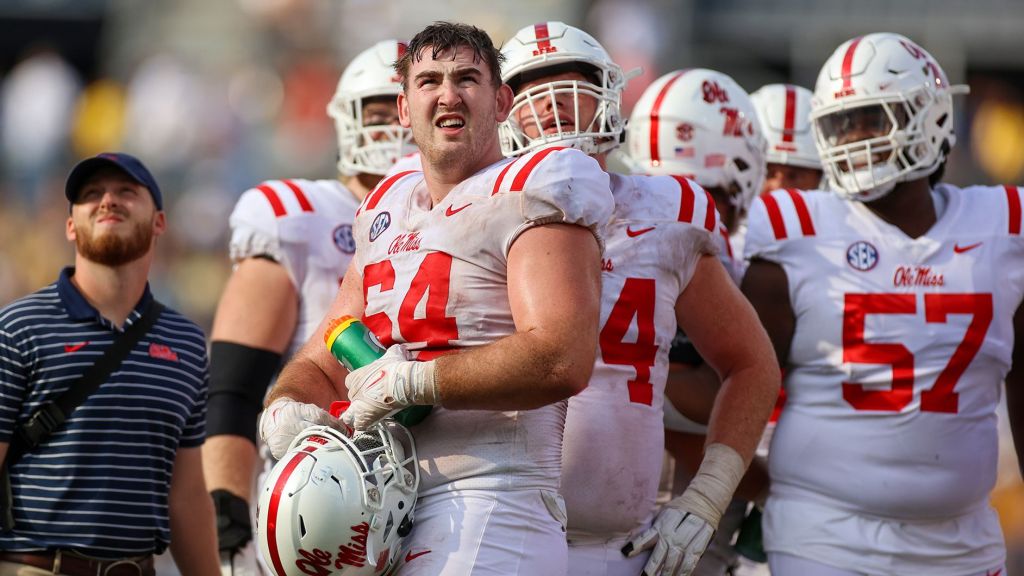 Ole Miss left guard Nick Broeker looks up at the video board during the Rebels' 42-0 win over Georgia Tech on Saturday. (Joshua McCoy/Ole Miss Athletics)

BIRMINGHAM, Ala. – After a historic rushing performance set forth by the Ole Miss football team Saturday in a 42-0 win at Georgia Tech, Nick Broeker earned Offensive Lineman of the Week honors from the Southeastern Conference.

This marks Broeker’s third SEC weekly honor, having been named Offensive Lineman of the Week once each in 2020 and 2021. Broeker is the first Rebel to earn a weekly honor from the league office so far this season.

The Preseason All-America and All-SEC honoree paved the way for a Rebel rushing attack that amassed 316 yards on the ground in the blowout road win in Atlanta. Behind Broeker and the rest of the Rebel O-line, running backs Zach Evans, Quinshon Judkins and Ulysses Bentley IV combined to score all six of Ole Miss’ touchdowns in the victory.

Broeker, an Outland and Lombardi Award Watch Lister, graded out at 96 percent in the Rebel triumph. He totaled six knockdowns against the Yellow Jackets with zero pressures and zero sacks allowed.

Broeker and the Rebels return to Vaught-Hemingway Stadium to host Tulsa at 3 p.m. CT Saturday on SEC Network.