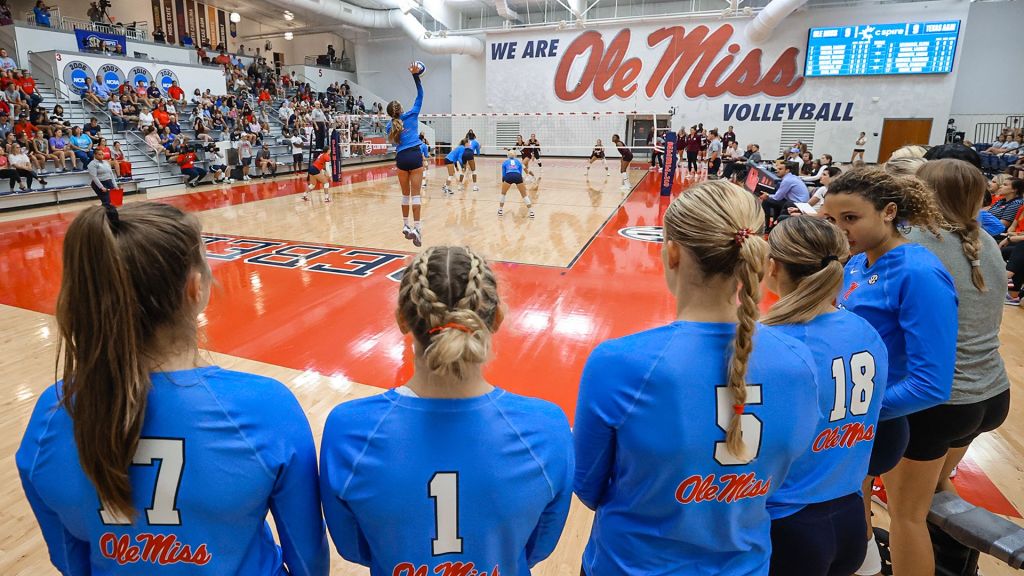 Ole Miss volleyball was unable to hold off a late Aggie surge as they fell to Texas A&M in five sets on Wednesday. (Ole Miss Athletics)

The Rebels (4-7, 0-1 SEC) and Aggies (9-3, 1-0 SEC) needed five sets for the second consecutive year and seventh time in the all-time series. In the end, Ole Miss couldn’t overcome 24 kills from Texas A&M senior Caroline Meuth and 16 blocks from the Aggie defense.

Anna Bair led the Rebel attack with 13 kills. She was joined by Vivian Miller, Katie Corelli and Payton Brgoch, who all finished in double figures.

Ole Miss came out on fire in the first set, opening the match on a 5-1 run. Texas A&M closed the gap, tying the match back up. Midway through the set three kills from Bair highlighted a 6-0 scoring run to put the Rebels up 16-12. They managed to build their lead up to six and close out the first set, 25-19.

Texas A&M responded in the second set to even the score. Both teams went back and forth until the Aggies found a way to score consecutive points and hang on to take the set, 25-22.

Just when it looked like the Aggies were going to run away with set three, the Rebels dug their heels in and rallied back from an eight-point deficit. Down 17-8, Corelli and the Rebels found a spark, rattling off a 6-2 run to cut the TAMU lead to four and force a timeout. Ole Miss then used a 7-0 to tie the match at 22 all and make things interesting. Texas A&M managed to get set point at 26-25, but Ole Miss stormed back with three unanswered points to go up 2-1 in the match.

Set four featured another close battle as the Rebels and Aggies found themselves tied at 19 all. Trying to extend the match, Texas A&M used a big 6-0 run to stun Ole Miss and force a fifth set.

With the match on the line, the Rebels ran out of magic. Texas A&M managed to score in bursts, and Ole Miss just couldn’t find an answer, falling 15-10 in the winner-take-all set.

The Rebels are back in action, traveling to Fayetteville, Arkansas, to take on the 20th ranked Razorbacks Saturday at 3 p.m. CT. Fans can catch the match on SECN+.