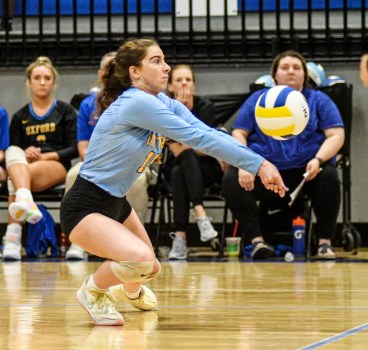 A new name is now in the record books at Oxford High School.

Junior defensive specialist Madi Jones became the first player in school history to reach 1,000 career digs this past weekend—eclipsing the mark during the Saint Showdown Tournament at St. Andrew’s.

Head coach Ashley Martin told the team about the milestone achievement during practice on Monday before presenting Jones and her family with a commemorative ball before Thursday’s match against Tupelo.

“She played a lot her eighth-grade year and that gave her a lot of experience,” Martin said. “You can see the growth in her—I mean our coaching staff was talking about that the other day—just her growth and how much better she’s gotten. It’s just an awesome feat. I’m really proud of her for being able to accomplish that.”

Jones deferred credit to her teammates when asked about the accomplishment.

“My teammates have done a really good job picking me up and lifting me up,” she said. “If I make a mistake, they’re there for me and I know that. Everybody here has helped me get to where I am.”

She added that the accomplishment came as a surprise given her shifting role on the team this year—where she has played multiple positions on the back line as the Chargers try to defend their North Half title.

“It’s amazing. It’s something I didn’t really expect because there’s been a lot of shifts this year—I moved to left back some, I play some middle back so it just depends on who we’re playing,” Jones said. “Our blockers do a really good job of handling most of the balls so it feels like not that many balls get to me but I love when they come to me though.”

Oxford clinched the Region 3-6A title with a sweep of Tupelo on Thursday, and will face off with Northwest Rankin on Tuesday as they reach the home stretch of their regular season.