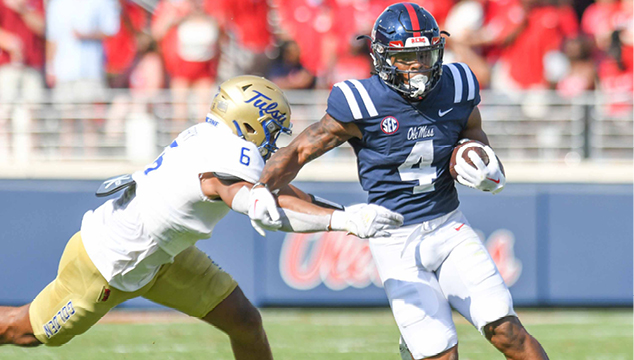 Ole Miss faced their most difficult test of the season to date on Saturday as they were challenged by a scrappy Tulsa squad who entered the contest with the top passing attack in the country.

The Rebels (4-0) struggled to contain the Golden Hurricane’s passing attack in the opening quarter—falling behind for the first time this season before exploding for 28 points in the second quarter to open up a comfortable lead at the break en route to a 35-27 victory.

“You can’t pick and choose when you’re gonna play [well]—no matter what the play is, what the score is or what stadium you’re in and unfortunately we did that today,” said head coach Lane Kiffin. “We did win so we’re 4-0, which is the best that you can be from a record standpoint at this point, but [this game] was kinda similar to the first game of the year where we played really well early and then didn’t [the rest of the way].”

True freshman running back Quinshon Judkins did most of the heavy lifting for Ole Miss in the period—rushing for 79 yards and two touchdowns as the Rebels opened up a 35-14 lead.

The Pike Road, Alabama native showed off his elite vision and power as he carved up the Golden Hurricane defense time and time again in the quarter.

He finished the day with 122 yards on 20 carries as he recorded the second 100-yard performance of his short collegiate career.

“I think he looked really good, he made some really good runs,” Kiffin said of Judkins’s performance. “He continues to play well—especially for a freshman.”

Quarterback Jaxson Dart also found his rhythm in the second quarter—completing four of his six attempts for 73 yards and two touchdowns.

The sophomore signal-caller connected on a pair of long touchdown passes in the period, including a 31-yard dime to receiver Malik Heath that gave Ole Miss the lead with 10 minutes to go before the break.

“I thought Jaxson played well,” said head coach Lane Kiffin. “I thought he was good, smart with the ball… it really was a different game once we started moving.”

The offensive outburst proved momentous—as the Rebels were outscored 24-7 in the other three quarters in a game where they struggled to move the chains effectively against a strong Golden Hurricane secondary.

Ole Miss clung to an eight-point lead for most of the fourth quarter after failing to crack the scoreboard in the third as the offense stalled out in the second half.

The Golden Hurricane had plenty of opportunities to close the gap, but the Rebel defense stood strong to force three straight punts on the final three drives of the game.

“We’re really good on offense and we’re really good on defense—we just weren’t consistent tonight. We’ve all been around teams and games where you didn’t feel good about one side or both sides at all, so now we just have to put it together,” said Kiffin.

The narrow win marked the fourth consecutive victory for Ole Miss to open the season—their first 4-0 start to a season since 2015.

The Rebels will be back in action next week as they kick off their SEC schedule against No. 8 Kentucky at home at 11 a.m.