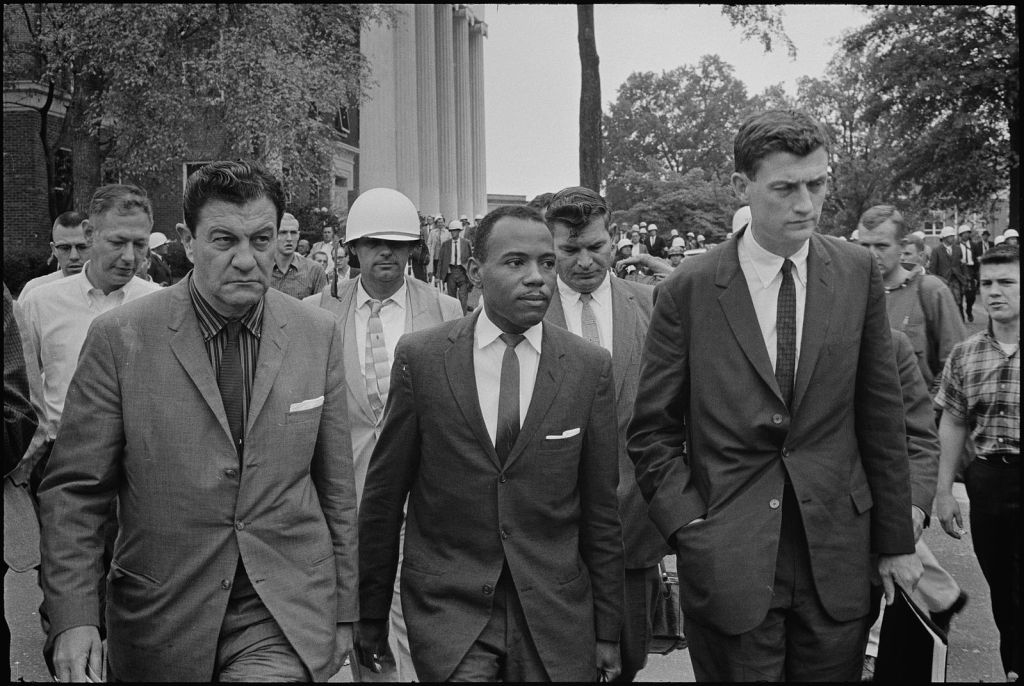 James Meredith is flanked by U.S. marshals on his way to class in October 1962. (Marion S. Trikosko)

September 30, 2022, marks the 60th anniversary of what has been called the Ole Miss Riot. After multiple Court orders, numerous phone calls, extensive negotiations and some prolonged shadow boxing between the long-suffering President John Kennedy and the grandstanding Governor Barnett, James Meredith was finally on campus in a dormitory on Sunday, September 30, 1962, to enroll at Ole Miss the next day.

Katzenbach ordered the federal Marshals arriving that afternoon to form a perimeter around the Lyceum where the registration was planned the next day. A large contingent of federal troops were standing by in Memphis. The Mississippi National Guard had been activated by Presidential order.

As the evening progressed, the protest turned into a riot and the marshals began using tear gas to counter the surging crowds which had resorted to throwing bricks, iron pipes and even shooting at the marshals. Conditions continued to deteriorate and around 9:50 pm Katzenbach ordered the Oxford unit to the Lyceum. The Oxford unit was Troop E, Second Squadron, 108th Armored Cavalry Regiment.

The convoy by the Oxford unit was viciously attacked by the crowd with windows broken out of their vehicles and 28 injured by the time they reached the Lyceum. Arriving around 10:10, the Oxford unit members immediately fell in line with the marshals. One of those injured in the convoy was the Company Commander, CPT Murry C. (Chooky) Falkner. Falkner’s left arm was broken in three places by a brick. Falkner, was the nephew of the noted author William Faulkner, the author adopting a different spelling from the family name.

Around 11:00 pm, the marshals were out of tear gas and the crowd was beginning to move on the Lyceum. One marshal turned to PSG Buford Babb the ranking sergeant on the line with the Oxford soldiers, and told him to take over as the crowd surged forward. Babb not seeing any officers around, took charge. The soldiers had no tear gas or ammunition. PSG Babb shouted the command, “Fix bayonets”. The twenty guardsmen in line assumed a riot control formation and started to the crowd; three steps forward, thrust weapons out and shout, repeating this several times. The crowd melted back into the darkness and the assault was thwarted. The Oxford unit would stand their ground and perform admirably as the other national guard and federal troops came in through the night.

President Kennedy ordered the federal troops standing by in Memphis to move to Ole Miss around 10:00 pm. Advance elements of the 503 rd Military Police Battalion did not arrive until 2:15 am, October 1. The main body of the 503 rd arrived at the Lyceum at 5:00 am.

In the after-action report by CPT Falkner, he opined that had the Oxford National Guard not reached the Lyceum at that critical time, “the marshals, as well as many others, would have been rushed and killed. Initially, the mob would have won! Many buildings would have been burned and destroyed.”

While federal troops would remain in Oxford for 10 months, the riot was officially over at noon on October 2, when the blockade was lifted. There were two deaths, a journalist and a local resident, who was by all accounts a by-stander. Both died as a result of gun shots. No suspects have ever been identified. Of the 166 federal marshals who were injured, 30 of the injuries were from gun shots. A number of civilians were treated by Dr. Gere Hopkins in his makeshift clinic at the Lyceum, at the student infirmary and the hospital.

BG (R-MS) Falkner passed away April 23, 2004. MSG(R) Babb spent 41 years in the military, 37 of which was with the Oxford unit and lives just outside of Oxford today. General Falkner, MSG Babb and the other members of the Oxford unit have never received the credit and recognition they deserved for their very heroic service as the first military unit on campus and the force that held the rioters in check until the others arrived. In the words of the author of the American Insurrection, The Guardsmen and their fellow army troops would probably reject the title of “American Heros,” but few men are more qualified to wear the title.

On this, the 60th Anniversary of the Riot, we need to remember the heroic actions of the Oxford National Guard.

Most of the information for this article was obtained from the book by William Doyle, An American Insurrection, James Meredith and the Battle of Oxford, 1962 (New York: Anchor Books, 2003).

Note: Waller served with MSG(R) Buford Babb in the Oxford National Guard Unit from 1975 until 1981.