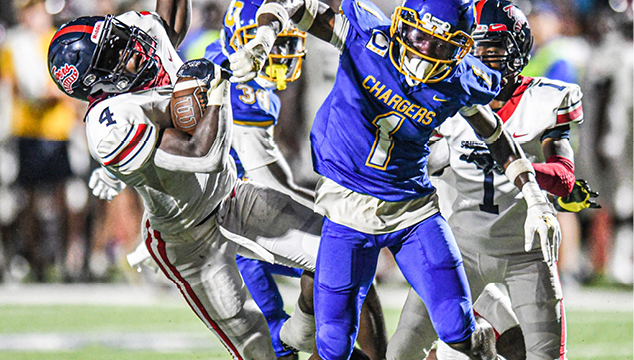 Oxford football travels to Tupelo on Friday to take on the Golden Wave in a matchup between two of the top teams in Region 2-6A.

The Chargers (3-1, 1-0 Region 2-6A) are coming off a 43-8 win over Murrah in which their reserves did most of the heavy lifting—with backup running back Jaidyn Young breaking loose for 74 yards and two touchdowns on six carries.

“First and foremost, getting off on a winning foot in region play is huge, but I do think we played well in all three phases and did some really good things,” said head coach Chris Cutcliffe.

Oxford was able to get whatever they wanted against the Mustangs, but they will have their hands full this week as they take on a Tupelo squad that enters Friday’s contest as the No. 5 team in the state.

The Golden Wave (5-0, 1-0 Region 2-6A) are one of the most improved teams in the state this year—combining a potent offense with an active defense that excels at getting into the backfield and forcing negative plays.

“They’re very talented on all three phases,” said Cutcliffe. “They’re big and strong up front, they’ve got great speed all over the field and they do a lot of things on both sides of the ball that you really have to work to prepare for.”

Quarterback Jeremiah Harrell is the undisputed leader of a Tupelo offense that is averaging over 35 points per game so far this season.

The junior signal-caller has completed 70 of his 105 attempts this season for 1,032 yards while amassing an impressive 13-1 touchdown to interception ratio.

“He’s been fantastic to start the year, there’s no doubt about it,” Cutcliffe said of Harrell. “Any time you face a good player at quarterback you’ve got to generate pressure on him… so we’ve got to do a good job being sound in all areas defensively.”

The pair have combined for 530 yards and six touchdowns so far this season—providing a lethal one-two punch to complement a high-flying passing attack.

“They do a good job of complementing each other and being balanced in what they do in their rushing attack,” said Cutcliffe. “We’ve got to be really sound defensively and we’ve got to tackle—they’re good skill players in space and that’s kind of the name of today’s game is open-field tackling and doing a great job of preventing explosive plays.”

Tupelo also trots out a physical defense that excels at generating negative plays in order to disrupt the rhythm of opposing offenses.

The Golden Wave have surrendered just 23 points through the first five games of the season while racking up 43 tackles for loss as a team.

Freshman JaReylan McCoy is perhaps the most talented player on either side of the ball for Tupelo however.

The 6-foot-7, 250-pound defensive lineman has recorded 16 tackles this season, including five for loss, and already has an offer in hand from Ole Miss.

“They’re very talented up front, there’s no doubt about it,” Cutcliffe said. “They do a good job of playing different defenses so we’ve got to do a great job handling that from a schematic standpoint and then we have to do a great job of winning one-on-one matchups—whether that’s at the line of scrimmage or in the open field.”

The Chargers will take on the Golden Wave at 7:30 p.m. on Friday at Renasant Field in Tupelo. The game will be available on osdcharger.tv and Bullseye 95.5 FM.