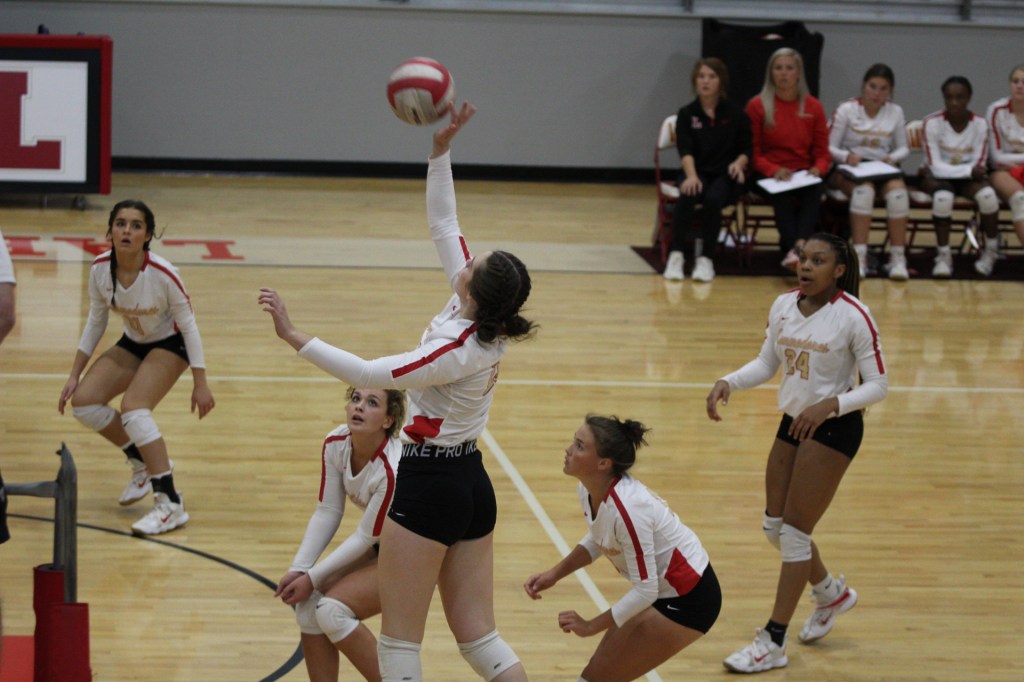 Lafayette's Maggie Tower (22) rises for an attempt during the Commodores' loss to Lake Cormorant on Thursday. (Claire Anne Pugh/CMG)

Lafayette needed to win one set to give themselves a chance at the district title.

The Lady Commodores entered Thursday’s contest against Lake Cormorant with a perfect 3-0 record in Region 1-5A play, and had a chance to wrap up the region title with a close match against the Gators.

“They would shank balls almost to the wall and then somebody would pick them up and put it back into play—I mean nothing was dropping,” said head coach Taylor Elliott. “That’s how we played them the first time… but you could definitely tell they wanted it and they brought it tonight.”

Lake Cormorant looked dominant from the jump—racing out to an 8-3 lead in the opening set before cruising to a 25-16 victory.

They continued to control the action through the next two sets as the Lady ‘Dores shot themselves in the foot time and time again with costly miscues.

“That’s the worst that we’ve played all season,” Elliott said. “I thought we had a plan we had practiced so I don’t know what it was about tonight—I guess you win some and you lose some—but we’ve never looked that disorganized and made that many errors.”

Lafayette needed to win at least one set in order to trigger a tiebreaker for the title, and could have won the district outright if they managed to take at least two sets from the Gators.

They fell well short of their goal however as they were swept at home for the first time this season in one of the biggest matches of the year.

“I’ve been trying to teach them mental toughness and that’s something that really showed itself on the court tonight,” Elliott said. “Nobody had mental toughness so we’re gonna try and work on that before the playoffs.”

The Lady ‘Dores wrap up their regular season next week with matches against Brandon, Oxford and DeSoto Central before turning their attention to the playoffs—where they will square off with Greenville in the first round with a trip to Ridgeland on the line.