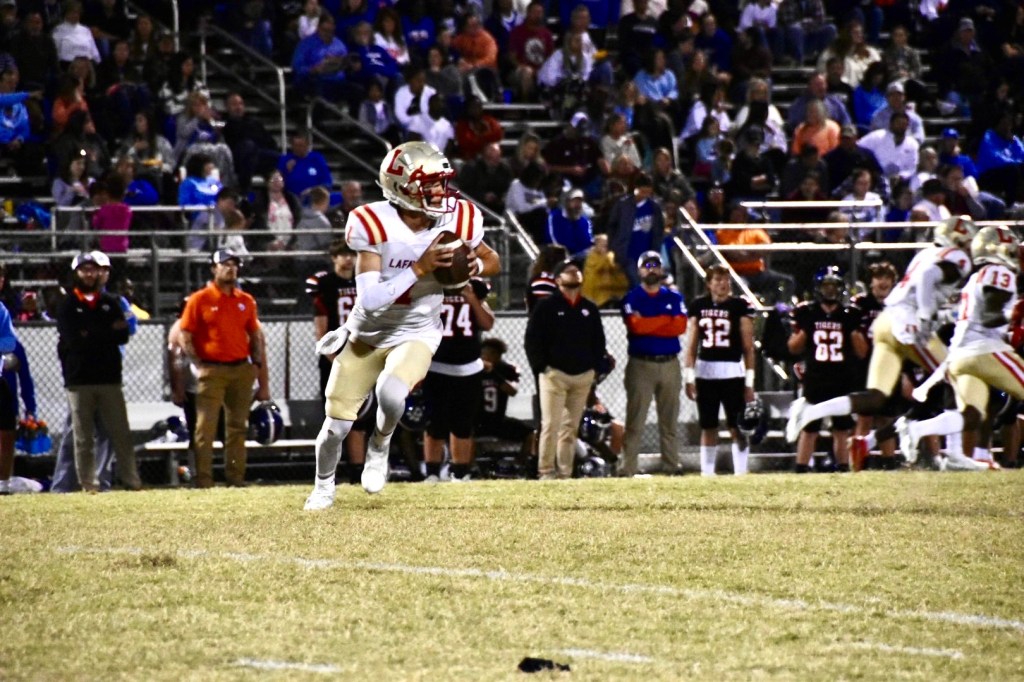 Lafayette quarterback Charlie Fair rolls out on a pass attempt in the Commodores' 56-7 win over Saltillo on Friday. (Commodore Media Group)

SALTILLO, Miss. — Lafayette football snapped a three-game losing streak on Friday as they blew out Saltillo 56-7 for their first district win of the season.

The Commodores (2-4, 1-1 Region 1-5A) were able to get whatever they wanted against the Tigers—exploding for 42 points in the first half behind strong performances from running back Jay Reed and quarterback Charlie Fair.

“I thought we were clicking in all three phases,” said head coach Michael Fair. “We returned the opening kickoff for a touchdown and I thought that set the tone for us. We were able to make some plays on the perimeter which I think opened up our run game offensively.”

Lafayette’s defense, which has struggled to defend the running game so far this season, stymied the Tigers at every turn—holding them to just one first down in the first half as their offense ran up the score.

“I thought our defense played really well, [they] just really swarmed to the ball,” Fair said. “It means a lot because we have a lot of confidence there now. The way they kind of ran to the ball tonight kind of shows me that theses guys are all-in and making a commitment to getting better every day.”

The win marked an important bounce-back victory for the Commodores after they were blown out by West Point at home last week.

They will be back in action next week when they play host to Columbus at 7 p.m. on Friday.

“We’re just taking it a week at a time, and to be honest it’s more than it—it’s one day at a time,” Fair said when asked about next week’s matchup. “We’re 1-1 in district play right now and the biggest game of the year is coming up next because that’s the way we are from here on out—they’re all big.”