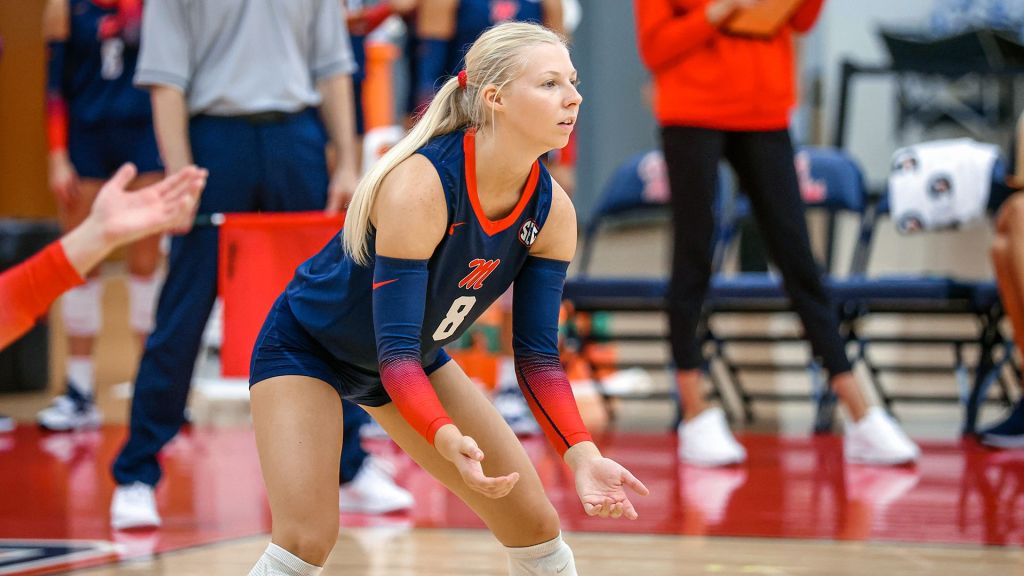 BATON ROUGE, La. – The middle blocker duo of Sasha Ratliff and Payton Brgoch was electric, stepping up to lead Ole Miss volleyball to its first conference victory, a five-set win over LSU, Saturday night inside the Pete Maravich Assembly Center.

The Rebels (5-9, 1-3 SEC) came back and responded after dropping last night’s match in five sets, getting revenge on the Tigers (9-6, 3-2 SEC). Ratliff tallied a team-high 17 kills on a .536 hitting clip, and Brgoch tied her career-high with nine blocks, including the game-winner. In total, four Rebels finished in double-figure kills, with Anna Bair, Katie Corelli and Vivian Miller contributing 15, 12 and 10, respectively.

Two early aces from Maggie Miller set the tone as Ole Miss opened the match on a 6-1 run, forcing LSU to burn a timeout seven points into the contest. The Rebels continued to hold on to their lead, but the Tigers fought back to tie the match at 20 and take the lead with five unanswered points. The momentum stayed on the LSU side of the court as the Tigers scored four of the final five points to take the set.

Rebels build up an early lead again in set two, doubling up the Tigers early at 8-4. LSU once again elected to take its first timeout to stop the momentum. Ole Miss and LSU found themselves tied at 20, but this time the Rebels strung together a 4-0 run with a pair of kills from Bair and Miller to earn set point and won the set on an LSU service error.

Ole Miss carried over the momentum into set three, building up a 15-12 lead at the media timeout. Out of the TV break, Aly Borellis was lights out at the service line, and the Rebels were dominant at the net, ending the set on a 10-3 run.

Knotted up at seven in the fourth set, LSU used a 3-0 run to take the lead. Ole Miss called a timeout to regroup but was never able to get back within striking distance. The Tigers were strong down the stretch to stay alive and force a fifth set for the second consecutive night.

After a back-and-forth start, the Rebs took a 6-4 lead following a clutch ace from Bair. LSU had to quickly burn both of its timeouts as Ole Miss held the two-point advantage at the side change and extended the lead to four as Ratliff scored three straight points. At match point, Brgoch called game, rejecting the Tiger attack to help Ole Miss secure the victory.

The Rebels return to Oxford to host Alabama in a pair of matches on October 7 and 8 at the Gillom Center.