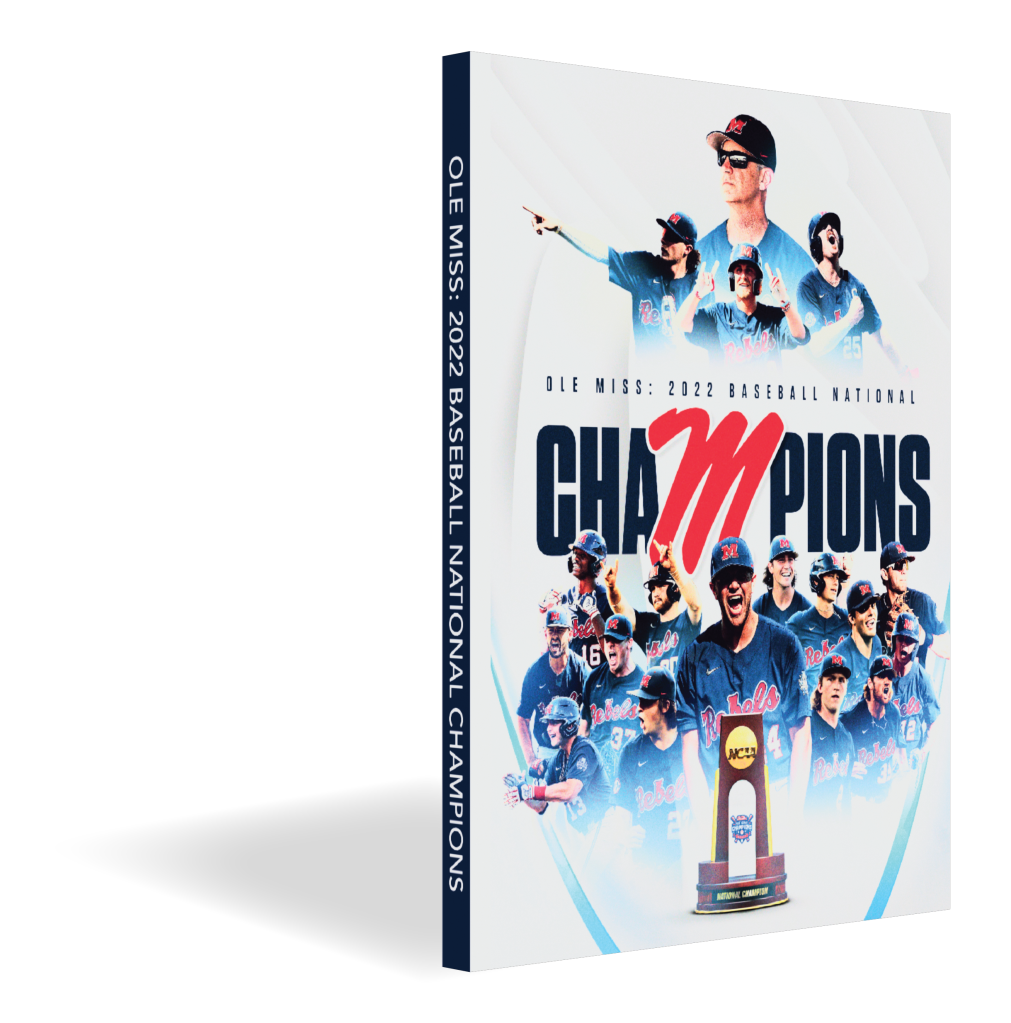 The book’s publication has its own dramatic storyline.

Neil White, creative director and publisher at The Nautilus Publishing Company said, “The turnaround time to produce this product was unparalleled — in the best of times. Considering paper shortages, a tight labor market, and book manufacturing backlogs, getting this book in the hands of readers three months after the championship game was nothing short of another miraculous team effort.”

Not Jinxing the Run

Anticipating the win, White and his team at Nautilus had prepared a proposal to publish a commemorative College World Series book, but “we didn’t dare send it to Ole Miss Athletics until the final strikeout,” White said. “I had an email crafted to Ole Miss Athletics Director Keith Carter and Ole Miss Athletics Foundation CEO Denson Hollis. The proposal was attached. I had my laptop open, email drafted, and curser floating over the ‘send’ button. After the final pitch, as the Rebel players poured onto the field in Omaha for a final dog pile, I sent the email.”

Carter and Hollis both agreed it would be a perfect way to commemorate the historic baseball season, so White gathered a team of writers that included veteran sports reporter Jeff Roberson. Then, Nautilus partnered with Ole Miss Athletics Photographer Josh McCoy and Associate Athletics Director for Sports Production and Creative Services Micah Ginn. In a matter of three weeks, the team curated more than 20,000 images to narrow the photographs to the 200 best. “The Ole Miss sports photography team, led by Josh McCoy, is the most talented in the country,” White said. “We’ve published dozens of photography books, but this one — not a chronicle of nature, architecture, or the arts, but baseball — has some of the most striking images we’ve ever reproduced.”

Roberson and his team of writers captured the “Hollywood” narrative arc of the season with precision and accuracy — all within the three-week deadline.

Even members of the Ole Miss baseball squad pitched in to make the book a collector’s item. Tim Elko, who was prepping for his major league career, took the time to write a foreword to the book. And Coach Bianco crafted an essay entitled, “A Different Path.”

Nautilus, in spite of paper and labor shortages, was able to secure a slot in the press queue. But there was no margin for error. “We had a 24-hour window in late August to upload the book to the printer in order to get on press. The book had to be completely finished — with no room for deadline extensions,” White said. “It was an unprecedented effort among the Ole Miss Athletics staff, photographers, writers, designers, copyeditors, and manufacturers.”

Those combined efforts made the book available for the holiday season a mere three months after the final victory in Omaha.

Copies of the book are available at independent bookstores across Mississippi. They can also be purchased online at NautilusPublishing.com/CWS.