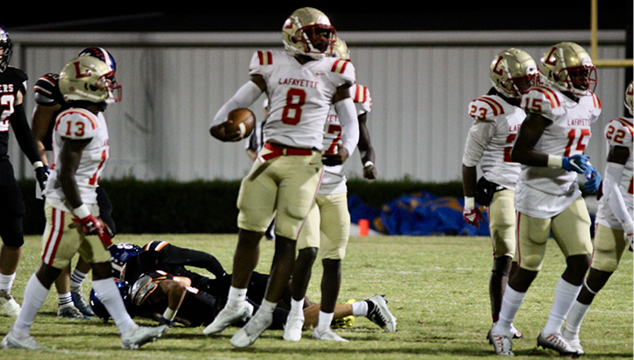 Lafayette football is not where they want to be.

The Commodores sit at 2-4 on the season (1-1 in Region 1-5A), but are coming off a dominant win over Saltillo in which they exploded for a season-high 56 points.

The offensive explosion came exactly when the ‘Dores needed it most as they snapped a three-game losing skid and secured their first district win of the season.

Head coach Michael Fair said the key to victory was ensuring that his players were focused on what they can control rather than what other teams throw at them.

“The focus is still on us, and that’s where it’ll stay,” Fair said. “From here on out they’re all big-time games, they’re all for seeding but if we can continue to keep the emphasis on us and be the best version of ourselves that we can be each week I think that’ll keep a lot of the clutter out of our players’ minds.”

That sharpened focus will be put to the test this week as they face perhaps the most difficult test remaining on their schedule with Columbus  traveling to William L. Buford stadium.

The Falcons (2-4, 2-0 Region 1-5A) started the season 0-4 before putting together back-to-back wins against New Hope and Greenville to open district play.

They scored a season-high 34 points in their win over the Hornets last week, and boast a number of talented athletes on each side of the ball.

“They’re very athletic on both sides of the ball—big on both sides of the line of scrimmage,” Fair said. “They played a really tough schedule as well and we’ve got some common opponents like Tupelo and Southaven. You can kind of see they’re a team that’s evolving week-to-week and I think they’ve got a good football team.”

When asked how he plans to attack a team that is bigger, stronger and faster at nearly every position, Fair said it’s important to stick to the basics and go with what has worked for his team so far.

“We feel like we’re going to play as hard as anybody. We’ve played so many schools that were—not just larger classifications but had more team speed or more size at the line of scrimmage and we’ve just tried to find things that our young men can have confidence in and have success in,” Fair said. “Our guys take a lot of pride in that ‘Lafayette’ on the front of their jersey and I think that’s evident. It doesn’t matter we’re playing some a little bigger or a little faster or whatever because our kids have full confidence—most of all with each other, but also in their coaching staff and I think that goes a long way.”

The Commodores struggled early in the season against a difficult slate of non-district opponents, but Fair and company hope their newly-honed focus will translate to more wins as they get further into their district schedule and begin fighting for playoff seeding.

“Nobody ever lost focus. Nobody lost faith in each other or the the system… These kids just rallied around each other and came to practice ready to work and get better each and every day.”

Lafayette will kickoff against Columbus at 7:00 p.m. on Friday at William L. Buford stadium.