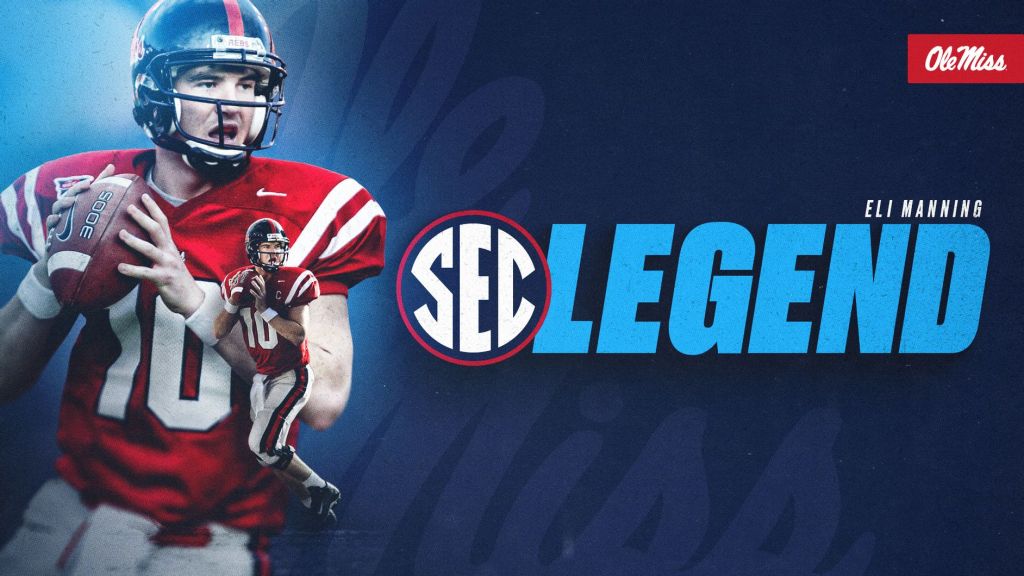 Former Ole Miss quarterback Eli Manning was announced as one of 14 members of the 2022 SEC football legends class on Thursday. (Ole Miss Athletics)

BIRMINGHAM, Ala. – Former Ole Miss quarterback and 2003 Maxwell Award winner Eli Manning is one of 14 members of the 2022 Southeastern Conference Football Legends class, the league office announced on Thursday.

The class will be honored at the 2022 SEC Football “Weekend of Champions” December 2-3 in Atlanta, Georgia, highlighted by the annual SEC Legends Celebration on Friday, Dec. 2 at the College Football Hall of Fame in Atlanta.  The group will also be recognized prior to the SEC Football Championship Game, which will be held at Mercedes-Benz Stadium on Saturday, Dec. 3.

Manning, a four-year letterwinner for the Rebels from 2000-03, won the Maxwell Award as a senior, an honor given to the best all-around player in college football. He set or tied 47 Ole Miss single‑game, season and career records during his time in Oxford.

The New Orleans, Louisiana, native became the highest pick in program history when he was selected No. 1 in the 2004 NFL Draft. His father, Archie Manning, was the No. 2 overall pick of the New Orleans Saints in 1971 after a historic career with the Rebels from 1968-70.

Eli solidified his place in Ole Miss history with a historic senior campaign in 2003. Besides the Maxwell Award, he won the Johnny Unitas Golden Arm Award and earned numerous All-America honors after throwing for 3,600 yards and 29 TDs. He earned SEC Offensive Player of the Year, helping lead the Rebels to a 10-3 record and a win over Oklahoma State in the 2004 Cotton Bowl.

After being drafted No. 1 by the San Diego Chargers, Manning was traded to the New York Giants for Phillip Rivers. Manning would go on to don a Giants uniform for 16 years, retiring shortly after the 2019 season. He was named to four Pro Bowls and was a two-time Super Bowl champion and two-time Super Bowl MVP. Manning was awarded the 2020 Bart Starr Award, which is given annually to an NFL player who best exemplifies outstanding character and leadership in the home, on the field and in the community.