Ole Miss soccer falls on the road at No. 4 Bama 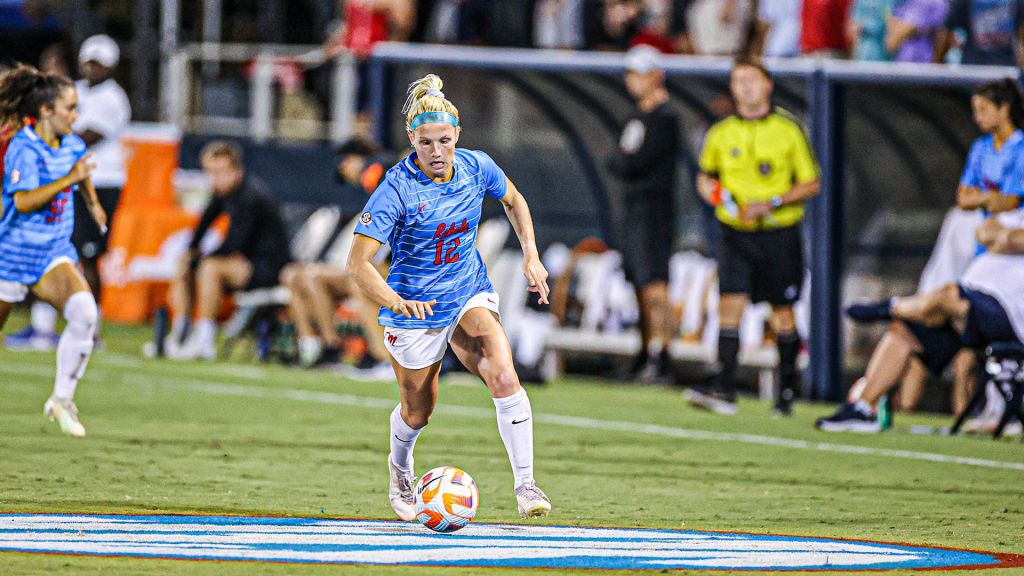 TUSCALOOSA, Ala. –In a top-25 matchup, No. 20 Ole Miss was unable to withstand a tough test at No. 4 Alabama, falling 4-1 to the Crimson Tide. The Rebels took the lead early but allowed four unanswered goals.

In an action-packed first half, the Ole Miss (9-2-2) offense started on the attack right as the whistle blew. From the opening kickoff, Ole Miss kept the ball in the attacking third, taking its first shot on Alabama (12-1-1) in the 3rd minute.

Forward Marykate McGuire sprinted up the right sideline with one Alabama defender to beat. McGuire made a move to the middle, dodging the Crimson Tide defender and keeper, then curved a low ball into the open net for her seventh goal of the season. Ole Miss took the lead 12 minutes into the game, 1-0.

Alabama responded quickly, scoring two goals within 30 seconds of each other in the 16th minute. The Crimson Tide continued to push, netting its third goal of the half nine minutes later to carry 3-1 lead into the halftime break.

The Crimson Tide stayed hot in the second half yet the Ole Miss defense kept them at bay for much of the final 45 minutes. Alabama added one more goal in the 71st minute to extend its lead up 4-1, yet the Rebels did not have enough gas in the tank to respond.

Ole Miss looks to turn things around at home against Texas A&M on Sunday at 1 p.m. CT. The matchup against the Aggies can be seen nationally on ESPNU.

Keep up with all the latest news and information on the Rebels by following Ole Miss Soccer on Twitter at @OleMissSoccer, on Facebook at Facebook.com/OleMissSoccer, and on Instagram