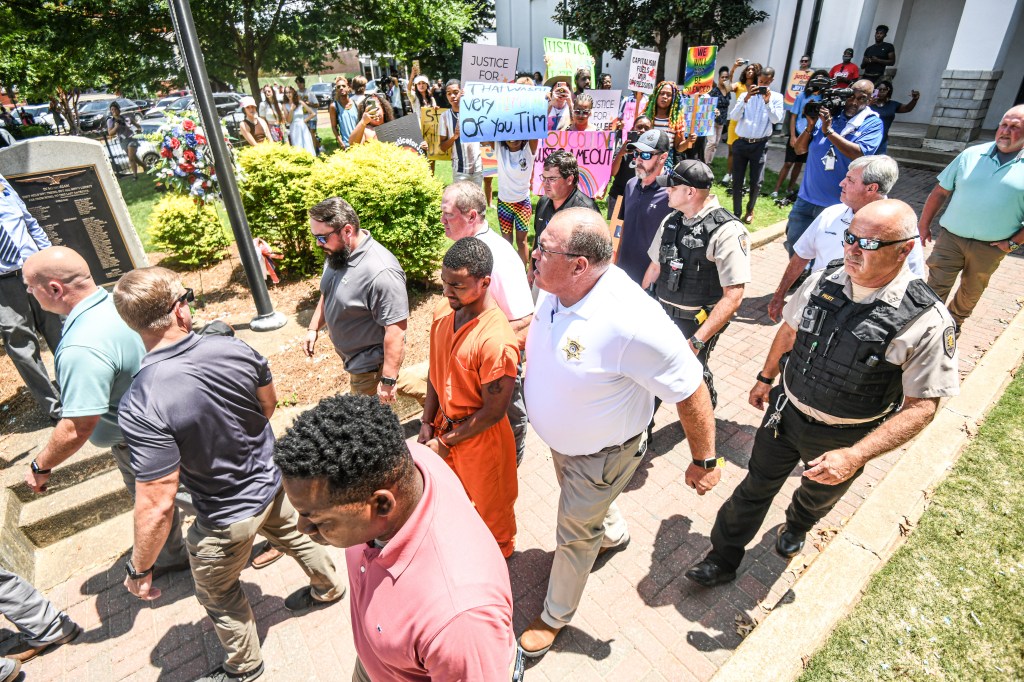 A recent filing by an attorney for Sheldon Timothy Herrington, Jr., claims a Lafayette County Grand Jury “failed to indict” the University of Mississippi graduate for the murder of Jimmie “Jay” Lee, but that’s not what happened.

The case has not gone to the grand jury yet, the Lafayette County Courthouse confirmed to Mississippi Today. This is likely because evidence is still being processed, a common occurrence in Mississippi courts that is not, on its own, a sign of the strength or weakness of the case against Herrington.

Herrington is being held without bond at the county jail after a judge ruled at his preliminary hearing on Aug. 9 that the 22-year-old was a flight risk and officers had probable cause to arrest the him for Lee’s murder.

In an Oct. 3 filing, Herrington’s attorney, state Rep. Kevin Horan, argued that the Lafayette County Sheriff’s Office is violating his constitutional rights by keeping him in jail, citing in part the fact that a grand jury held in August did not return an indictment in the case.

“The Lafayette County Grand Jury recently convened, subsequent to the date of the bond and preliminary hearings, and failed to indict Mr. Herrington for murder, or any crime, in connection with Jay Lee’s disappearance,” stated Horan’s writ of habeas corpus, which was first reported by the Oxford Eagle.

This is indicative, Horan argued, of “the State’s apparent failure to pursue prosecution to procure said indictment.”

Legal experts told Mississippi Today that a grand jury simply not hearing a case is not the same scenario as a failure to indict.

“There’s a difference in just not presenting it, and presenting it and the grand jury says, ‘there’s no f—ing way,’” said David Hill, a criminal defense attorney in Oxford. “If that’s the case, that should be his allegation.”

In an interview Thursday, Horan wouldn’t acknowledge that the grand jury hasn’t heard Herrington’s case yet, saying “all I know is they failed to indict.”

“Whoever told you, a news reporter, that the case was not presented should be sanctioned by the court,” he said.

News of the filing on Wednesday came as the body of Lee, a well-known Black student in Oxford’s tight-knit LGBTQ community, is still missing. The Oxford Police Department has not released any new information about the case or the possible location of Lee’s body since the preliminary hearing in August.

It’s also unclear to what extent OPD is working with law enforcement in Grenada County. The sheriff, Rolando Fair, who wrote a letter to Judge Gray Tollison asking that Herrington be given a bond, told Mississippi Today he could not comment because “the investigation is not my investigation.”

Fair added that no one from Oxford has reached out to him personally even though a search warrant was executed on Herrington’s parent’s house in Grenada in late July.

In Mississippi, a grand jury is the final step in a criminal investigation. Twenty members representing the community decide whether there is probable cause to indict a defendant, meaning the case could go to trial, or if the charges should be dismissed, which is called a “no true bill.” This is different from a preliminary hearing, which Herrington already had, when a judge looks at probable cause to determine if a defendant should be held until a grand jury hearing.

Prosecutors can trigger a grand jury hearing at any time once someone is arrested in Mississippi – there is no deadline in the state code of criminal procedure. This has resulted in people, particularly if they can’t afford their own attorney, sitting in jail for months or even years before they are formally charged with a crime.

Hill said it would have been unusually fast if the Lafayette County District Attorney’s Office had taken Herrington’s case to the grand jury starting on Aug. 23, considering he was arrested barely a month before. In general, prosecutors across Mississippi are expected to wait until all the evidence has been processed before they bring a case to a grand jury.

“I’m not surprised that a case that has one month of history didn’t get presented, because law enforcement doesn’t have all their evidence together,” Hill said.

Grand juries are secret; the public typically doesn’t know when, exactly, they’re hearing a case. But if Herrington had not been indicted in August, the public would already know about it. For one, a finding called a “no true bill” would have been filed on the case docket, indicating the grand jury did not return an indictment.

Horan said that if the grand jury had returned a no bill, the sheriff’s department “should have” been notified, meaning Herrington would have been released. In that case, “there wouldn’t be a need for that,” said Horan, referring to the habeas writ.

“It’s not a critical issue in the case, in the habeas anyway,” he added.

In August, the prosecution’s key witness, OPD Detective Ryan Baker, testified to the available evidence in the case, including video surveillance, Snapchat messages and a Google search that Herrington made as Lee was heading to his apartment the morning of July 8: “how long does it take to strangle someone gabby petito.”

But Horan was particularly interested in one piece of evidence that Baker presented. K-9s from the DeSoto County Sheriff’s Office identified the smell of a dead body three times in Herrington’s apartment and in his car and moving truck.

Horan argued that without corresponding DNA evidence of bodily fluids, the K-9s were not admissible in court in Mississippi – and therefore, Herrington should be given a bond because OPD had no “physical evidence” of Lee’s killing.

Horan revived this argument in the recent filing, writing “at this time the case against Mr. Herrington is purely circumstantial.”

A date has not yet been set for a hearing to discuss Horan’s petition to release Herrington; the earliest a grand jury can hear Herrington’s case is next year.