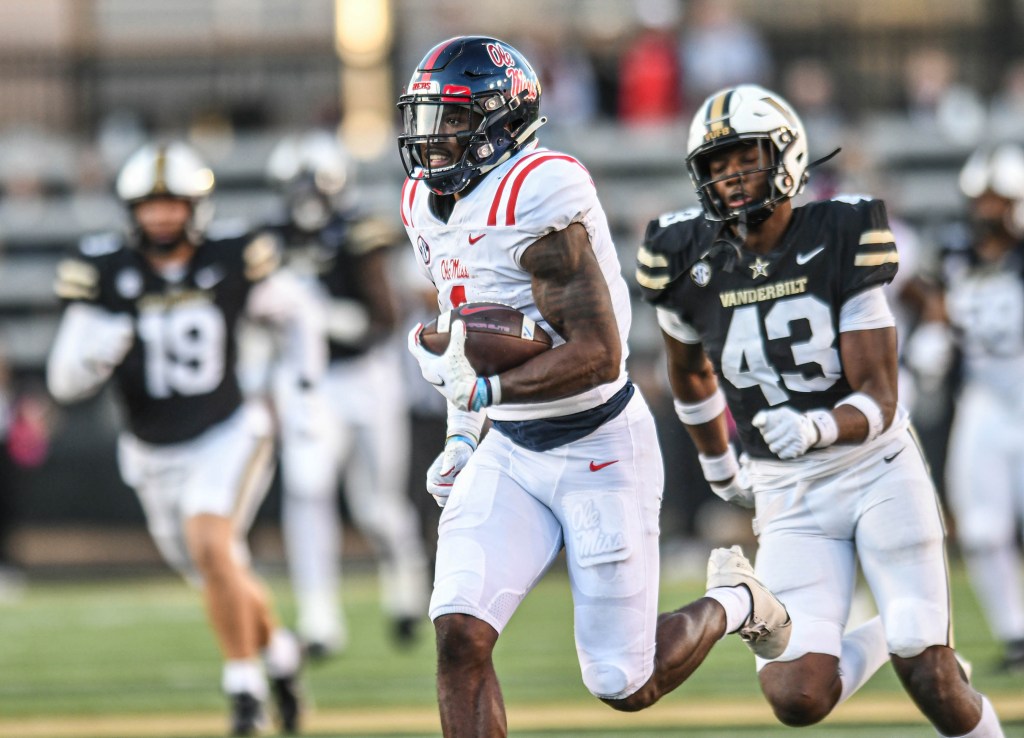 NASHVILLE, Tenn. (AP) — Jaxson Dart threw for a career-high 448 yards and three touchdowns, and ninth-ranked Mississippi rallied from a 10-point deficit Saturday in routing Vanderbilt 52-28 for its first 6-0 start since 2014.

The Rebels (6-0, 2-0 Southeastern Conference) won their fourth straight in the series after trailing 20-10 in the second quarter. Quinshon Judkins ran for the first of his two TDs just before halftime, then the Rebels added three more in the third quarter as part of 35 straight points.

Senior Jonathan Mingo caught nine passes for a career-high and national season-high 247 yards and two TDs, the last a short pass he caught at the line of scrimmage and took 71 yards to the end zone. The Rebels padded the lead with a 1-yard TD run by Matt Jones with 18 seconds left for the final margin.

Vanderbilt (3-3, 0-2) lost its 23rd consecutive SEC game and 10th straight for second-year coach Clark Lea. The Commodores scored 13 straight points to go up 20-10 before being shut out after halftime. De’Rickey Wright intercepted two passes for Vandy.

Lea went for the touchdown instead of a field goal on fourth-and-3 at the Ole Miss 5, and Ray Davis capped Vanderbilt’s longest drive this season with a 5-yard TD run up the middle with 1:32 left in the first half. The Commodores ran 15 plays and chewed 8:54 off the clock for a 20-10 lead.

Then Dart hit Mingo with a 48-yard pass down to the Vandy 3, and Quinshon Judkins scored two plays later from 2 yards out to pull Ole Miss within 20-17 at halftime.

Zach Evans capped the Rebels’ opening drive with a 24-yard TD run for Ole Miss’ first lead since the first quarter. Ole Miss added a TD within 90 seconds. Ladarius Tennison recovered AJ Swann’s lateral dropped by Davis, and Judkins ran in from 6 yards on the next play for a 31-20 lead.

Ole Miss: Dart more than proved he can throw when an opponent tries to shut down the run game. The Rebels hurt themselves early with too many penalties. They had to settle for a field goal with three penalties on the opening drive of the game and had six for 60 yards by halftime. They finished with nine penalties for 85 yards.

Vanderbilt: The Commodores have been quite good at taking the ball away, and Wright’s interception extended their streak with at least one takeaway to 15 straight games. They kept an Ole Miss offense that had been fifth nationally rushing for 261.8 yards a game to 143 yards.

The Rebels remain undefeated, and that should be enough to keep them in the Top 10.