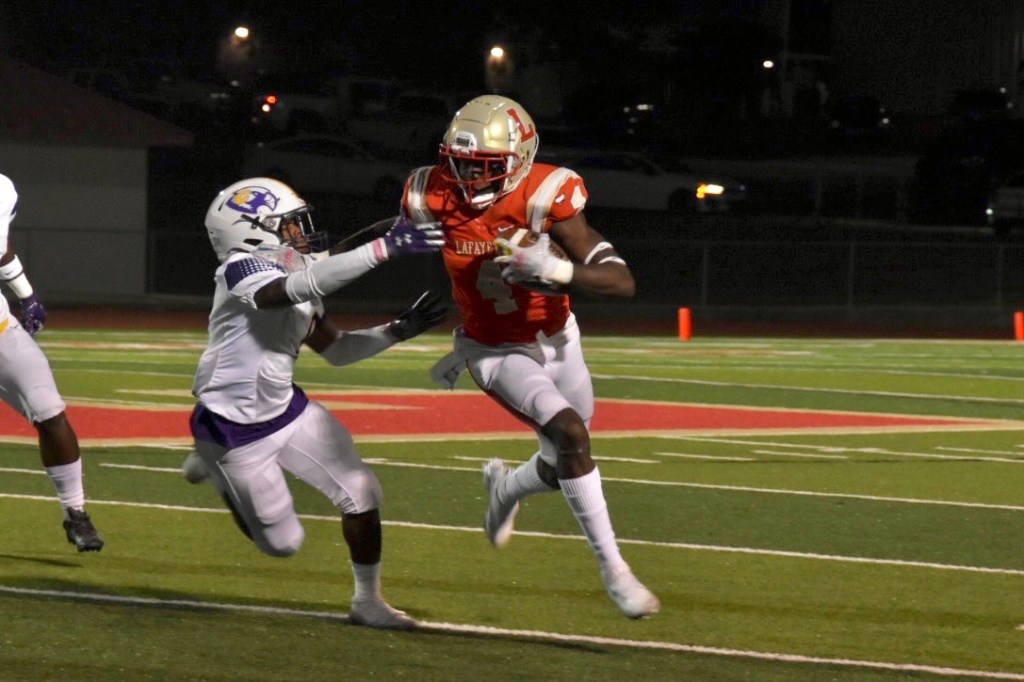 Lafayette’s Makyi Reed-Jones (4) runs against Columbus in the Commodores’ 45-13 victory over the Falcons on Friday. (Casey Osburg/CMG)

The Commodores’ struggled to find any kind of rhythm early in the season behind a 1-4 start, but a pair of blowout victories over Saltillo and Columbus has them in position to secure the No. 2 seed in Region 1-5A with less than a month remaining in the regular season.

The driving force behind that abrupt turnaround has been their ability to keep opposing defenses off balance with not only a physical running game, but also a high-flying passing attack capable of exploding for big plays on every snap.

“It’s a process. We’re making some changes from a philosophical standpoint here this year,” said head coach Michael Fair. “We started that back in March and you can kind of just see it evolve. I think each week it just gets better.”

The Commodores are just now settling into first-year offensive coordinator Will Wolfe’s new system, and their increased familiarity with timing and routes is translating into success on the field.

Quarterback Charlie Fair has thrown for at least 245 yards in three straight games for Lafayette after failing to reach the 200-yard mark in each of the Commodores’ first four contests.

“I think we got more comfortable,” the younger Fair said. “It was a new offense to start the year and I think it took a couple games to get going but now we’re starting to click.”

Wideout Makyi Reed-Jones is averaging 108 yards per game in his last five outings and is quickly establishing himself as a go-to deep threat for Fair.

With Reed-Jones on the outside and running back Jay Reed keeping opposing secondaries honest, receiver Damariun Gipson has found a niche in the Commodores’ screen game that adds yet another element of unpredictability to the offense.

The speedy receiver tallied a career-high 155 yards receiving in the win over Saltillo on Sept. 30, and is averaging 15.5 yards per reception this season.

The Commodores hope that improved chemistry will translate to another win on Friday as they travel to Columbus to take on New Hope with a chance to get back to .500 for the first time in over a month.

“I think they’re a really talented football team,” the elder Fair said. “This is the fourth time that we’ve played them since being in the district with them and some of these guys we’re preparing for Friday have been starters for the previous two years so they’ve got a lot of seniors that we’re familiar with.”

Lafayette dominated the Trojans in their last outing—coming away with a 51-0 victory at home in a game where Reed broke loose for 154 yards on the ground.

Fair was quick to point out that last year’s success has no bearing on this year’s contest however, saying that his team is prepared for a closely-fought battle.

“We are familiar with them but by no means can you look at what happened last year and say ‘oh we’ve got this in the bag,’ because we’re dealing with high school football players and each year has its own identity and each year does,” Fair said. “You can watch it just to be familiar with some scheme stuff but by no means can you expect the same thing.”

The Commodores will kick off against New Hope at 7 p.m. on Friday at Trojan Field in Columbus, Mississippi.