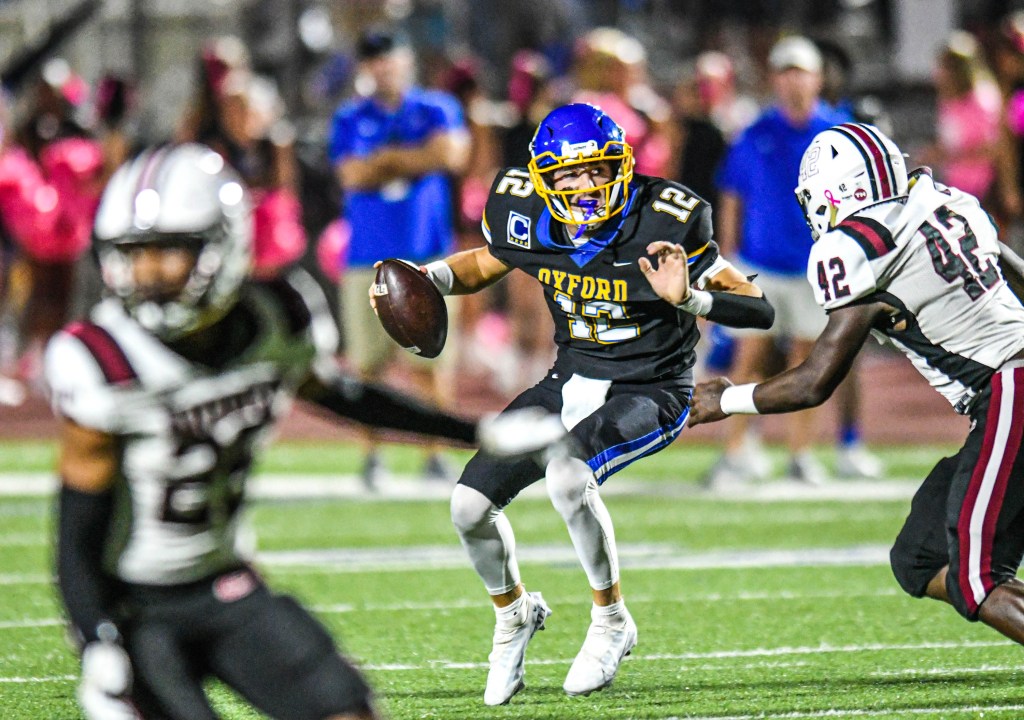 Oxford football is losing the battle of explosives.

The Chargers (3-3, 1-2 Region 2-6A) have lost back-to-back games against Tupelo and Germantown after a 3-1 start to the season, and are now in jeopardy of suffering their first losing season in over a decade with a difficult stretch of games awaiting them.

Head coach Chris Cutcliffe said the first priority in trying to right the ship is generating more explosive plays than the other team.

“I think that’s been one of the biggest factors the last few weeks—the explosive plays on both sides of the ball,” Cutcliffe said. “It’s definitely something that we continue to address on the practice field but we’ve got to do a better job of limiting explosives defensively and then generating explosives offensively. It goes hand-in-hand and we’ve got to continue to get better in both of those regards.”

A significant part of that process will be limiting the types of negative plays that have gotten the Chargers behind the chains and left points on the board all season.

Oxford boasts one of the most talented offensive units in the state, but they have shot themselves in the foot over and over again this season with penalties and costly mistakes.

“We had—I believe it was 17 negative yardage or offensive penalty plays and we’re not going to win doing that,” Cutcliffe said after the loss to Germantown. “We also had four drops and just some other plays left on the field. As coaches we’ve got to do a better job of having our guys in positions to make plays and that’s what we’ve got to go back to the practice field to correct.”

The Chargers will have little room for error on Friday as they play host to a red-hot Clinton team that enters this week’s contest as the only unbeaten team in district play.

The Arrows (4-2, 3-0 Region 2-6A) got off to a slow start this season against a difficult slate of non-district opponents—losing to No. 4 Ocean Springs and No. 1 Brandon before rattling off three straight wins to open district play.

They defeated Oxford 23-6 at home last season, and will be riding high on Friday following a stunning upset of then-No. 3 Madison Central last week.

“Clinton does a good job of mixing things up. They have several backs who can hurt you, their quarterback is an excellent runner and I think they’re team speed is outstanding,” Cutcliffe said. “I think that’s one of the reasons they’re so good running the football is because it’s not just one person, they can hurt you in different ways.”

That team speed has translated to plenty of long touchdowns and explosive plays this season, so the Chargers will have their hands full as they try to get back on track before closing out the season with games against Starkville, Grenada and Madison Central.

They will be aided by the return of cornerback Ryan Kirkwood, who has played in just two games this season while battling nagging injuries.

The star cornerback is expected to make his return against Clinton on Friday, and will provide a much-needed boost to a secondary that has been ripped apart in back-to-back weeks.

The Chargers will kick off against the Arrows at 7 p.m. on Friday at Bobby Holcomb Field. The game will be available on osdcharger.tv and Bullseye 95.5.