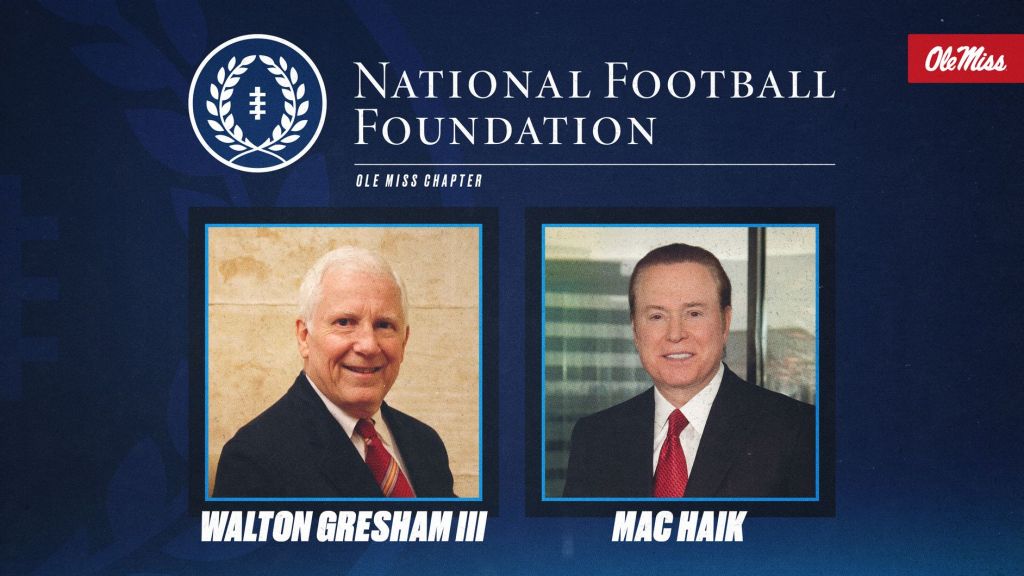 The Ole Miss Chapter of the National Football Foundation and College Hall of Fame will honor two Ole Miss alumni for their contributions to the school's athletics department on Saturday. (Ole Miss Athletics)

The Ole Miss Chapter of the National Football Foundation and College Hall of Fame will honor Walton Gresham III with its Contribution to Amateur Football Award and Mac Haik with the Distinguished American Award Saturday when the Rebels host Auburn.

Kickoff for the ESPN telecast is set for 11 a.m. at Vaught‑Hemingway Stadium/Hollingsworth Field.

The Contribution to Amateur Football Award is given by the Ole Miss Chapter in honor of those who have made numerous contributions to the college athletics world through service to their fellow man, while the Distinguished American Award is presented to individuals who have set the standards for excellence in a life of service to the community.

“We are pleased to honor Walton Gresham III and Mac Haik for their contributions to Ole Miss Athletics,” said Richard Noble, president of the Ole Miss Chapter. “They are most deserving of this recognition, and having an on-campus salute provides an excellent opportunity to express our sincere appreciation for all they have done for Ole Miss.”

A 1967 graduate of Indianola High School, Gresham III earned his BBA degree from Ole Miss in 1971 and was a member of the Phi Delta Theta Fraternity.

He has spent his life in Indianola, Mississippi, except for his first two years with his parents while his father was in the Korean War and his four years at Ole Miss.

Gresham III has been married to the former Laura Ethridge of Oxford for 51 years, and they have two daughters and five grandchildren. He is a lifelong member of St. Stephen’s Episcopal Church, serving in all offices over the past 50 years as well as being a licensed lay reader by the Episcopal Diocese of Mississippi.

Mac Haik, chairman and CEO of Mac Haik Enterprises LTD, graduated from the University of Mississippi in 1968 with a BBA degree in marketing and sales management, while also completing work towards a master’s degree in marketing. Haik, who was inducted into the Ole Miss M-Club Athletics Hall of Fame in 2001 and the University of Mississippi Alumni Hall of Fame in 2018, supports as many as 20 different charity organizations annually. He has also continued to support Ole Miss athletics and academic programs of his Alma Mater.

While attending Ole Miss, he was president of the Ole Miss Fellowship of Christian Athletes and a member of the Omicron Delta Kappa Leadership Society.Haik has received numerous honors during his professional business career, including the Ole Miss Farrington Distinguished Entrepreneur of the Year Award and the Ford Motor Company Hall of Fame.

Playing for legendary coach John Vaught, Haik lettered three years as a wide receiver for the Rebels and was selected as co-captain of the 1967 team. He earned All-Southeastern Conference honors his senior season and was also chosen an honorable mention All-American. Haik also excelled in the classroom during his time at Ole Miss and was named a CoSIDA Academic All-American as well as to the Academic All-SEC team. Following his Ole Miss career, Haik was the first choice of the then Houston Oilers in the 1968 NFL Draft.

Since the inception of Mac Haik Enterprises, the overall organization has grown from a start-up entity of two people to an organization that employs approximately 3,025 associates and generates revenues in excess of $2.8 Billion per year. The eleven affiliated companies of Mac Haik Enterprises have engaged in the development, ownership and management of commercial real estate and health care facilities, asset acquisition and disposition, facilities management, property management, leasing, project management, construction, janitorial services, and media advertising, as well as restaurants and hotel ownership.

Over the past 37 years, Mac Haik Enterprises, and its affiliated companies and personnel, have provided development, leasing, consulting, planning and construction services for in excess of 19,000,000 square feet of commercial real estate projects. Haik has “personally” been involved in consulting, brokerage and development of over $950,000,000 of property, including ownership in 13 acute care hospitals, 48 restaurants (115 restaurants on the Franchisor level), 17 nationally recognized car dealerships and over 1,100 outdoor advertising displays.

Mac Haik Realty (“MHR”) has developed approximately 3,114,076 sq. ft of office, hotel, restaurant and car dealership projects in the Houston ENERGY CORRIDOR alone. Haik’s Energy Plaza development located at THE GATEWAY TO THE ENERGY CORRIDOR™ is a landmark development in Houston and features 4 class “A” office buildings and an award-winning Embassy Suites Hotel. The Hilton/Embassy Suites hotel project received the “Deal of the Year” award from Hilton, the only such award given in the entire country for the fast track completion of the very first prototype of Embassy Suites’ new designer hotel.

Haik and all of his companies have adopted a “SWAT Team” philosophy that is committed to providing the highest quality and most personalized services available. A “hands-on” philosophy (as opposed to the “volume philosophy” of most companies) has generated significant, and sometimes remarkable, success stories that have resulted in long-lasting relationships that have fueled the company’s growth.