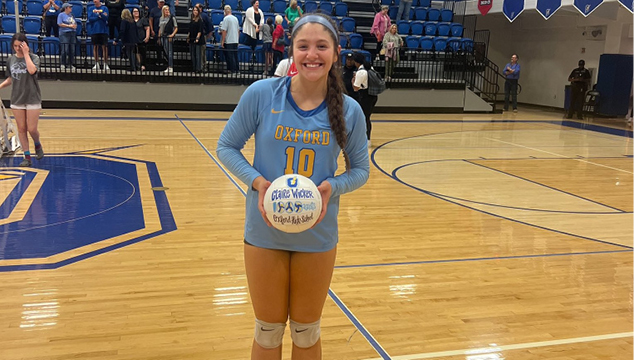 Wicker, who entered the night needing 14 assists to hit the mark, achieved the feat during the second set of the Chargers 3-0 win over Southaven in the second round of the MHSAA Class 6A playoffs.

She was recognized after the point with a standing ovation and hugs from her teammates before being presented with a commemorative ball following the match.

“I was really excited, [to be honored] in front of our students, our parents during a playoff game, I mean that’s just big,” Wicker said. “It feels so good to have people supporting me like that.”

The sophomore joined Catherine Bianco as the only players in school history to reach the 1,000-assist mark.

Wicker recorded 50 assists as a freshman last season while playing behind Bianco, and announced her presence in a major way this season as she transitioned into the starting setter role.

“I think she’s done a great job of being herself and being who she is on the court,” said head coach Ashley Martin. “I really watched her grow and develop as a leader as the season went on… sometimes in timeouts [now] I just kind of step back and let her take over because what she has to say is what the team needs to hear.”

The young star is also closing in on an even more significant milestone as she is just 44 assists away from becoming the first player in school history to eclipse 1,000 assists in a single season.

She enters Thursday’s North Half semifinal match against Madison Central with 956 assists on the year, and will have a chance to  set the record with a strong performance against the Jaguars.