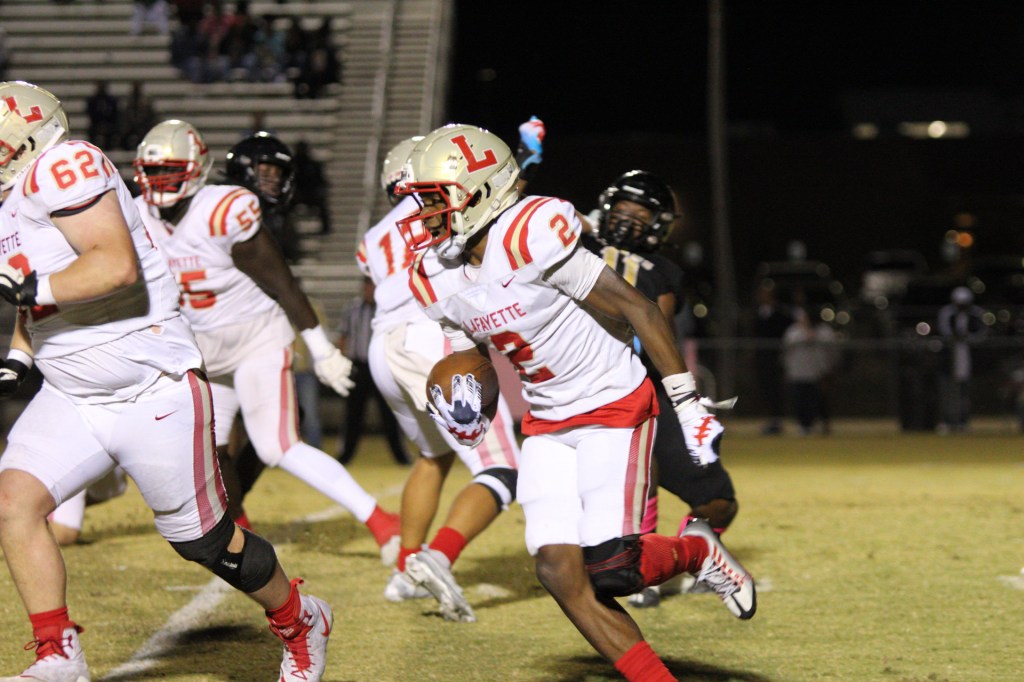 Lafayette football took advantage of a huge second half from running back Jay Reed on Friday as they defeated New Hope 34-14 in a key Region 1-5A battle.

The Commodores (4-4, 3-1 Region 1-5A) battled to a 14-14 tie in the first half before taking control of the game in the third quarter behind a stellar performance from Reed.

The senior tailback exploded for 120 yards in the second half after being limited to just 25 yards on seven carries in the first half.

“It was a tight game there in the first half, we were tied 14-14, but we wanted to get the line of scrimmage established and to be able to turn around and hand it to a senior back that’s kind of been in moments like that before is really a luxury,” said head coach Michael Fair.

The offensive explosion came at an ideal time for the Commodores as they struggled to move the ball effectively against the Trojans’ defense in the opening half.

The Commodores scored on each of their first two possessions—starting with an 85-yard touchdown return by Damariun Gipson on the opening kickoff before Reed scored his first touchdown of the night to make it 14-7 midway through the first quarter.

Then the offense disappeared.

Lafayette went three-and-out on each of their next three possessions before quarterback Charlie Fair threw an interception at the Commodore 30 to set up a 29-yard score for New Hope’s LaDarius Tate that evened the score at 14-14.

They punted two more times to close the second quarter after a 39-yard touchdown from Reed with less than a minute remaining before the break was called back due to a holding call.

The physical tailback wasted little time making up for it however as he proceeded to rush three times for 75 yards on the Commodores’ opening drive of the second half to retake the lead.

“Jay ran really, really hard. They had done a good job of taking away some of our perimeter stuff all night so being able to run off-tackle when we needed it most was big for our team,” said Fair.

Lafayette clung to their narrow advantage for over a quarter as New Hope drove deep into Commodore territory on back-to-back drives but were unable to find the end zone.

After a miraculous goal line stand early in the fourth, the Commodores took over at their own five yard line with just under 11 minutes remaining in the game.

They proceeded to march 95 yards down the field on a slow, methodic drive that burned four minutes off the clock before Reed found paydirt for the third time on the night to give the ‘Dores a 27-14 lead.

Lafayette cruised the rest of the way—adding another score late in the fourth as Reed crossed the goal line for the fourth time in the contest.

The win was dampened by a significant injury however as star linebacker Martrell Wilbourn was carted off the field in the first half after suffering an injury to his lower body.

Fair said the injury was significant, but added that the team would not know the full extent of it until tests come back over the weekend.

“It’s a serious injury but I don’t know exactly what we’re dealing with yet. He did go to the hospital so all our thoughts and prayers are with him right now,” Fair said.

Lafayette will be back in action next week as they host Cleveland Central at 7 p.m. on Friday at William L. Buford Stadium.