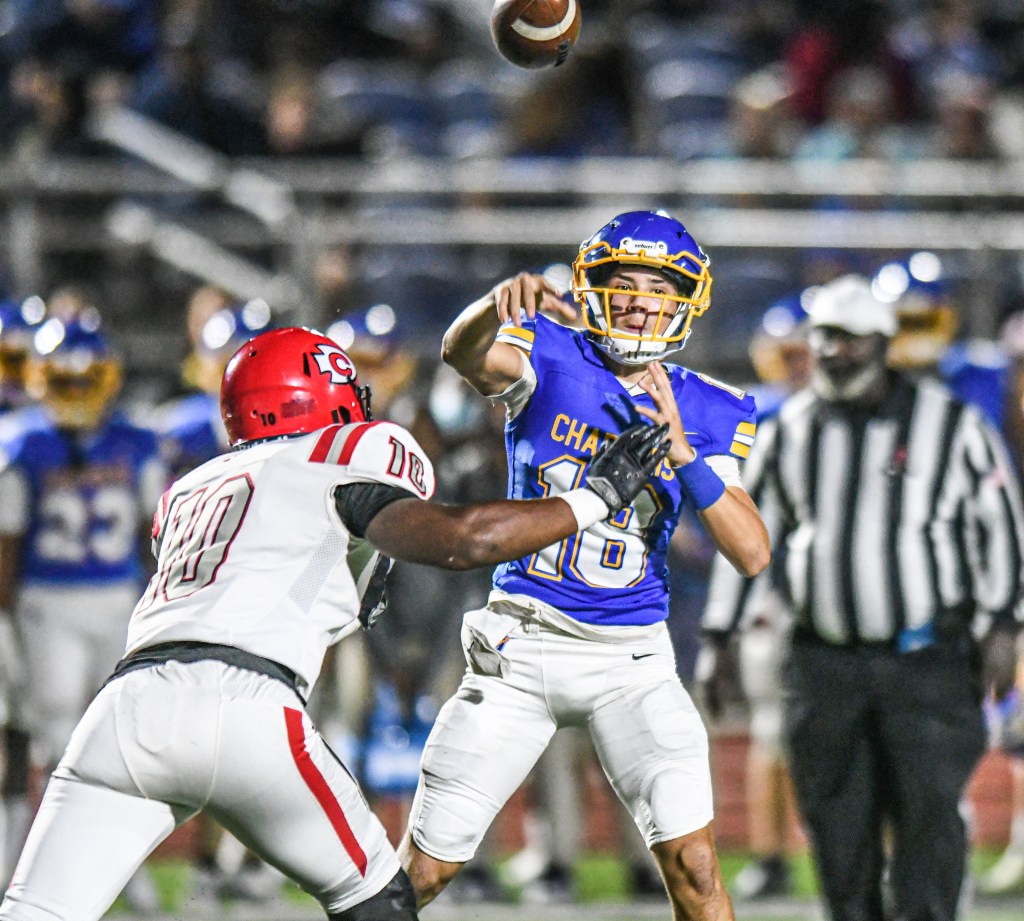 Oxford quarterback Mitchell Grandjean (18) throws over Clinton’s Jacquavyian Carter (10) on a play that resulted in a touchdown at Bobby Holcomb Field in Oxford, Miss. on Friday, Oct. 14, 2022. (©Bruce Newman)

Oxford (4-3) defeated Clinton (4-3) at Bobby Holcomb Field on Friday to put an end to their two game skid. The Chargers secured the 24-22 win on the back of a 33 yard game winning field goal from junior kicker William Wilkinson, and a superb performance from freshman quarterback Mitchell Grandjean. Grandjean was the first freshman to ever start a varsity football game for the Chargers at quarterback.

“We just told him the same thing we’ve told him all week,” Oxford head coach Chris Cutcliffe said. “We told him that he was prepared for this with the way that he’s prepared in freshman games and the way that he prepared on the practice field to get ready. He earned this opportunity so just go make the most of it, and he did that and more.”

Oxford opened the game with the ball and Grandjean was able to march the offense down the field with some help from success in the rushing attack with Roman Gregory. Grandjean was able to find senior tight end Jack Harper for the first of two Harper touchdowns on the evening. Clinton answered with back to back scores, but the Oxford offense scored with a double pass from Grandjean to senior receiver Cashe Shows to Harper right before halftime to give the Chargers the half time lead.

“I found out some time around Wednesday,” Grandjean said. “I had a couple of days to prepare with the help of great coaches that gave me an opportunity. They chose me and all glory to God. They gave me a really simple and easy scheme to remember. The entire experience was so awesome.”

The two teams traded scores in the second half, but in the end Oxford had the ball last. One minute and 34 seconds remained on the clock, and Grandjean and the Charger offense had one final chance to deliver a win. Oxford was able to march down the field thanks to throws on the run from Grandjean to multiple receivers, including one on second and 14 to Shows that put the Chargers in field goal range for good. The kick from Wilkinson was center cut, and the Chargers won a game that will go down as one to remember, and potentially one that can revitalize their season.

“I was so proud of what our staff accomplished and what our kids accomplished,” Cutcliffe said. “We had an entire team of guys out injured tonight. We had a lot of guys that stepped up in a big way tonight, and I’m thankful for it.”