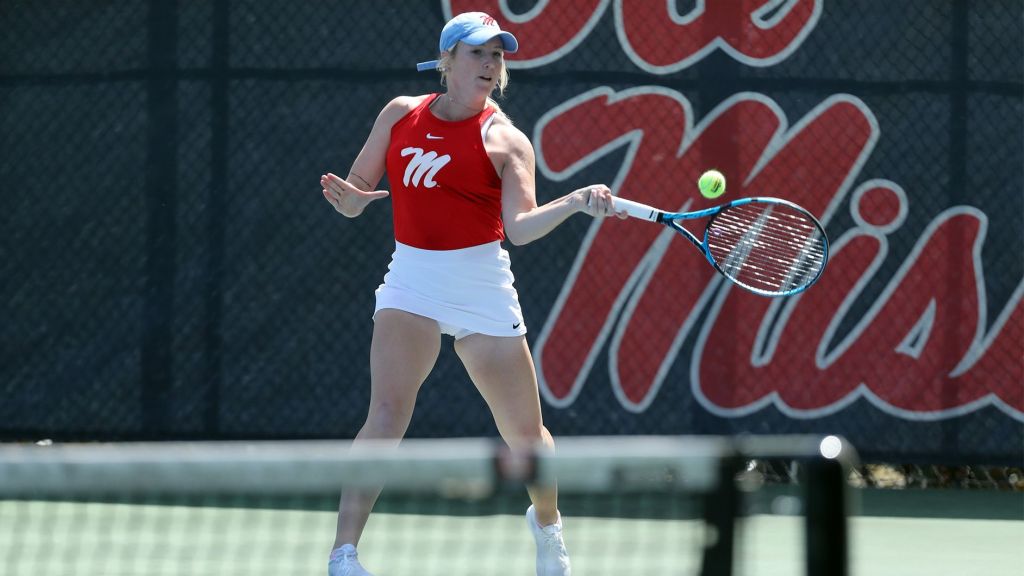 BATON ROUGE, La. –Ole Miss women’s tennis had a hot start to their ITA Southern Regional Championship in Baton Rouge on Friday, finishing the day 5-1 in singles and 2-0 in doubles play in the team’s first day competing at LSU.

A total of five individuals punched their ticket to the Singles Round of 32, matching the team’s total from last year’s ITA Southern Championships held in Tuscaloosa. The Rebels will also have both of their doubles pairings advancing to the Doubles Round of 16 after going undefeated on the day.

To get the ball rolling in Baton Rouge, Ole Miss claimed wins in five of the team’s six singles matches on the day.

Mize would open up the day in singles, being the lone Rebel without a bye in the Round of 128 and pitting the Tulsa, Oklahoma, native against Laurie Barendse of New Orleans. Mize made quick work of her opponent, snagging 6-4 victories in both of her sets to advance into the Round of 64.

The senior had a quick turnaround in the following round, with her matching up later in the day against the region’s No. 13 seed Nina Geissler of LSU. Even with the match going to three sets, Mize would eventually overpower Geissler to earn her second singles win of the day and advance to the Round of 32.

Both Rachel Krzyzak and Lillian Gabrielsen also earned places in the Singles Round of 32 in Baton Rouge, taking two-set victories following their first round byes earlier in the day. Gabrielsen made quick work of her opponent, defeating Northwestern State’s Paige Wise 6-0, 6-1, while Krzyzak also chalked up a swift 6-3, 6-2 win against Annalisa Smith (UAB).

The last singles win of the day for the Rebels came at the hands of Reka Zadori, who despite dropping the opening set came back to win her Round of 64 matchup over Elysia Pool of South Alabama 4-6, 6-3, 6-1. Zadori will look to surpass her singles performance from a year ago in Tuscaloosa, where she reached as far as the Singles Quarterfinals.

Despite her best efforts, Anaëlle Leclercq-Ficher was the lone Rebel to drop her singles match on the day, losing 6-1, 6-4 to Jacksonville State’s Anna Syrova. She now moves to the consolation bracket in singles play to close out her tournament.

The momentum didn’t slow for the Rebels moving into doubles play with a pair of impressive 8-4 victories from the doubles pairings of Ludmila Kareisova/Kelsey Mize and Rachel Krzyak/Lillian Gabrielsen.

Kareisova and Mize, who finished as the runners-up at the 2021 ITA Southern Regional, made quick work of their Jacksonville State foes Prato/Pavelekova taking home the 8-4 win. The duo will now face a tough challenge on Saturday in the region’s No. 1 seed and No. 14 doubles pairing in the country, Yelamanchili/Russell of Tulane.

The Rebel duo of Krzyak and Gabrielsen also claimed an 8-4 victory in doubles over the New Orleans pairing of Puscas/Bredberg Canizares, clinching another spot for the team in the Doubles Round of 16. Saturday’s match will be familiar territory for Gabrielsen, with the senior having reached the ITA Southern Regional Quarterfinals in doubles just a year ago.

The Rebels return to action tomorrow, opening the day at 9 a.m. CT with one round of doubles and will follow with Singles Round of 32 and then Round of 16 after.