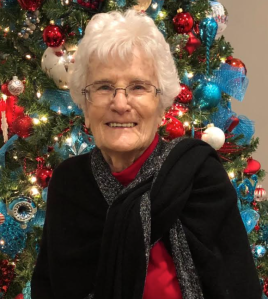 Jane was born on November 27, 1931, in Mathews, MO.  She moved to Sikeston, MO in 1949 and began a nearly 40-year career as a telephone operator for Southwestern Bell Telephone.  In 1952, she married Ralph B. Cantrell who preceded her in death on January 25, 1998.  Jane enjoyed reading and sewing.  During retirement, she and Ralph spent many of their days boating at Lake Wappapello near Poplar Bluff, MO.  She was a member of the First Baptist Church in Sikeston, Mo.  In April 2018, she relocated to Oxford, MS.

She is survived by one son, Timothy (Tricia) Cantrell of Oxford, MS., and one daughter, Lesia (Sam) Sanchez of Maricopa, AZ.; two grandchildren, Brett (Stacey) Cantrell and Jordan (Lauren) Cantrell, and 5 great-grandchildren.

A yet to be scheduled private family service is planned to memorialize her life.  Memorials in Jane’s honor may be sent to First Baptist Church at 1101 N. Main St. in Sikeston, MO 63801.