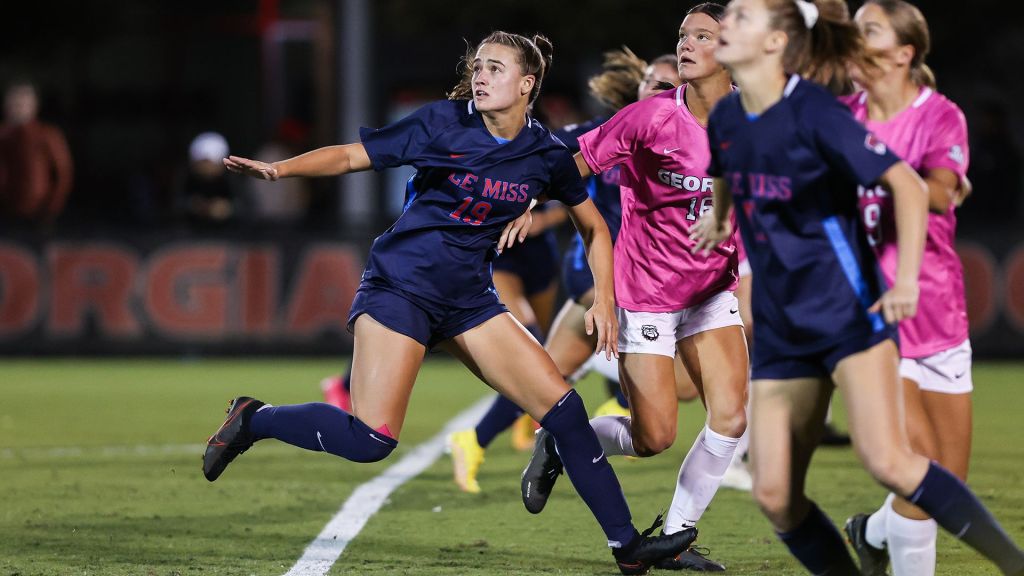 Ole Miss defender Riley Friesen plays against Georgia in the Rebels' loss to the Bulldogs on Thursday. (Ole Miss Athletics)

ATHENS, Ga. – Ole Miss’ stellar defense was not enough as they fell to Georgia 1-0 on the road. The Rebels held the Bulldogs to just one goal despite being outshot 18-7 in the game.

Ole Miss (9-5-2) started the game with the momentum, creating a great look for a goal in the 15th minute. On a free kick at half field, Ashley Orkus set up Mo O’ Connor in front of the Georgia (10-5-1) net. O’Connor ripped a shot that was blocked by a Bulldog defender.

The Rebels played stellar defense in the first half, holding the Bulldogs to zero goals despite the Bulldogs outshooting the Rebels, 7-1, including just one on goal. The two teams went into the halftime break tied, 0-0.

In the second half, Georgia kept on attacking the Rebel defense. The Bulldogs were finally able to notch a goal. It didn’t come easy as Orkus made two saves back-to-back before Georgia was able to find the back of the net on the third shot on goal.

Orkus kept the Rebels in the game with another incredible save in the 58th minute. A Bulldog forward powered past the final Rebel defender for a one on one with the sixth-year senior. Orkus closed the gap and made herself big to blocked the shot, keeping the game at 1-0

Ole Miss had four great chances in the final 20 minutes in an attempt to tie the game. In the 71st minute, Camryn Bliss found an opening at the top of the opposing box and let it rip but saved by the Bulldogs’ keeper. Aubrey Mister, in the 83rd, took a shot to the top of the net, but stopped by the opposing keeper. Finally, Taylor Radecki struck the ball off a free kick opportunity right to the keeper in the 88th minute

Orkus made five tremendous saves to keep the game within reach.

Ole Miss plays their final home game of the season, hosting No. 7 Arkansas on October 23, at 1 p.m. CT.