Oxford unable to overcome slow start in loss to Starkville 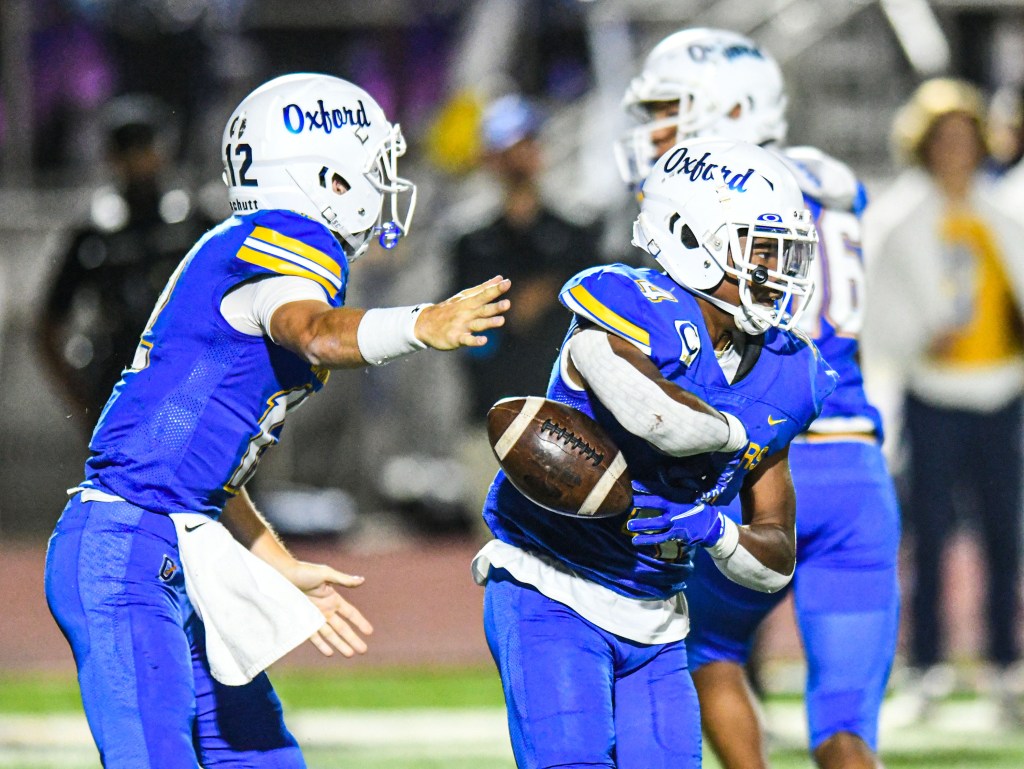 Oxford’s Roman Gregory (4) fumbles a handoff from quarterback Mack Howard, which was returned for a Starkville touchdown by Jermar Mccarter (11), at Bobby Holcomb Field in Oxford, Miss. on Friday, Oct. 21, 2022. (©Bruce Newman)

Oxford football struggled to overcome a slow start on Friday as they lost 47-28 to Starkville in the ninth edition of the Little Egg Bowl.

The Chargers (4-4, 2-3 Region 2-6A) were unable to find a rhythm offensively in the first half, going three-and-out on each of their first three possessions.

“The slow start in general, really across the board really but certainly offensively—I mean we really dug ourselves into a whole against a really good football team and that is hard to overcome,” said head coach Chris Cutcliffe.

The Chargers finally broke through early in the second quarter when running back Roman Gregory scored on a three-yard touchdown rush to make it a 21-7 game with just over 10 minutes remaining before the half.

The Yellow Jackets immediately answered back with a scoring drive of their own however when quarterback Trey Petty connected with receiver Braylon Burnside for a 46-yard touchdown pass to push the lead back out to three scores.

“A lot of credit goes to Starkville—they’re an outstanding team and I thought they played extremely well offensively,” Cutcliffe said. “I thought we gave up some plays in the passing game but I thought the biggest thing was that we didn’t stop the run well enough.”

Oxford managed to narrow the deficit back down to 14 with a 34-yard touchdown pass from quarterback Mack Howard to receiver Dane Harmon before Gregory found the end zone for the second time on the night as he broke loose for a 59-yard touchdown rush on the Chargers’ first offensive play from scrimmage in the second half to make it 28-21.

They were unable to match the Yellow Jackets’ firepower the rest of the way however, giving up three more touchdowns in the second half as Starkville pulled away in the closing minutes of the fourth.

“I thought Roman did a nice job competing throughout the night and he had some explosive plays but at the end of the day we really couldn’t match them blow-for-blow after digging ourselves a hole to start,” Cutcliffe said.

Their offensive struggles on Friday were just the latest in a long line of frustrating games for Oxford as they have been unable to find a consistent rhythm on that side of the ball throughout district play.

The Chargers have averaged just 17 points per game over their last four contests, and are rapidly running out of time to right the ship with just two weeks remaining in the regular season.

Cutcliffe said that penalties and negative plays have been the biggest obstacle to success for his team in recent weeks, calling those types of plays “drive-killers.”

“We had three big holding penalties on offense that essentially ended drives for us. They put us behind the chains and we weren’t able to recover from it so that’s always a focus, obviously but those negative plays and penalties are drive-killers and we’ve got to continue working to get better at eliminating those,” Cutcliffe said.

Oxford will try to get back on track next week when they travel to Grenada before returning home to face Madison Central in their final contest of the regular season on Nov. 3.