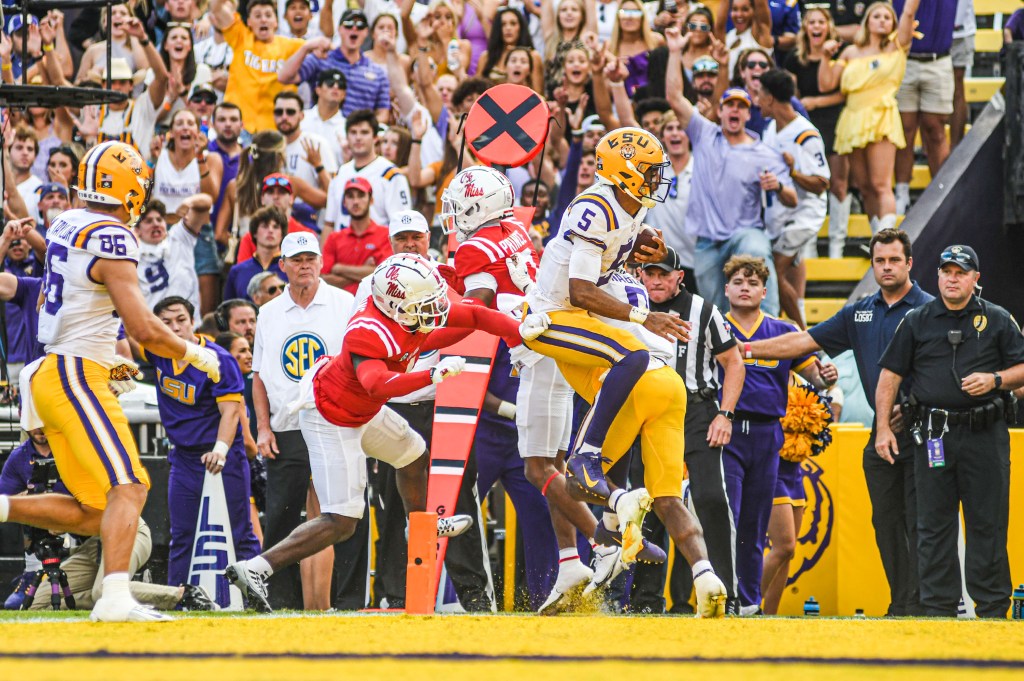 BATON ROUGE, La. (AP) — Jayden Daniels ran for three touchdowns and passed for two scores, and LSU roared back from an early two-touchdown deficit to hand No. 7 Ole Miss its first loss this season, 45-20 on Saturday.

The performance gave the dynamic Daniels the LSU record for touchdowns rushing in a season by a quarterback with nine. Daniels also has accounted for 11 TDs rushing or passing combined in the span of two games. He had three of each in a 45-35 victory at Florida last weekend.

Reveling in the resounding triumph over a historical and highly-ranked rival, LSU fans stormed the field as the game ended. Now LSU (6-2, 4-1 SEC) is back in the race to win the SEC West — if the Tigers can beat No. 6 Alabama.

After being outgained 200-80 in the first quarter and falling behind 17-3 on Jonathan Cruz’s field goal to start the second quarter, LSU outscored Ole Miss (7-1, 3-1) 41-3 the remainder of the game.

Daniels passed for 258 yards and ran for 121 without a turnover. His scoring passes went for 34 yards to Jaray Jenkins and 1 yard to tight end Mason Taylor. He ran for touchdowns of 3, 11 and 17 yards, the longest all but salting the game away in the fourth quarter.

Nearly everything went right for LSU in the second half. Even linebacker Harold Perkins Jr.’s unsportsmanlike conduct penalty after a third-down stop at the Rebels’ 15-yard line early in the fourth quarter couldn’t turn the tide in the Rebels’ favor. Down 11 points at the time, Ole Miss wound up having to punt anyway minutes later.

Daniels then drove the Tigers 75 yards for a touchdown to make it 38-20.

After first-quarter touchdown runs of 3 and 6 yards by Judkins, Ole Miss was threatening to go ahead 21-3 when LSU’s defense finally got a stop on third-and-5 from the LSU 13, limiting the Rebels to a field goal.

The Tigers then scored two touchdowns to tie it. Daniels hit Jaray Jenkins with 34-yard scoring pass and Daniels capped the Tigers’ next possession by keeping the ball on a read-option run from the 3.

But LSU’s defense battered Ole Miss QB Jaxson Dart in the second half. The Rebels QB finished 19 of 34 for 284 yards. He was intercepted in the LSU end zone by Joe Foucha in the third quarter on a pass thrown under pressure from linebacker Micah Baskerville.

Ole Miss: Oddsmakers clearly had been unimpressed with Ole Miss’ schedule through its first seven games, and also by the Rebels’ inability to quickly put away struggling Auburn last week. Ole Miss was listed as a slight underdog at Tiger Stadium and LSU covered by more than three touchdowns. Kiffin also had foreshadowed a tough game, calling LSU “by far” his team’s most talented opponent this season. That proved prophetic.

LSU: First-year coach Brian Kelly has the Tigers playing their best football on the heels of what could have been a demoralizing 40-13 loss at home to No. 3 Tennessee three weeks ago. LSU also again showed its resolve in winning for the third time this year after trailing by 13 or more in conference play.

LSU is off next weekend before hosting No. 6 Alabama on Nov. 5.