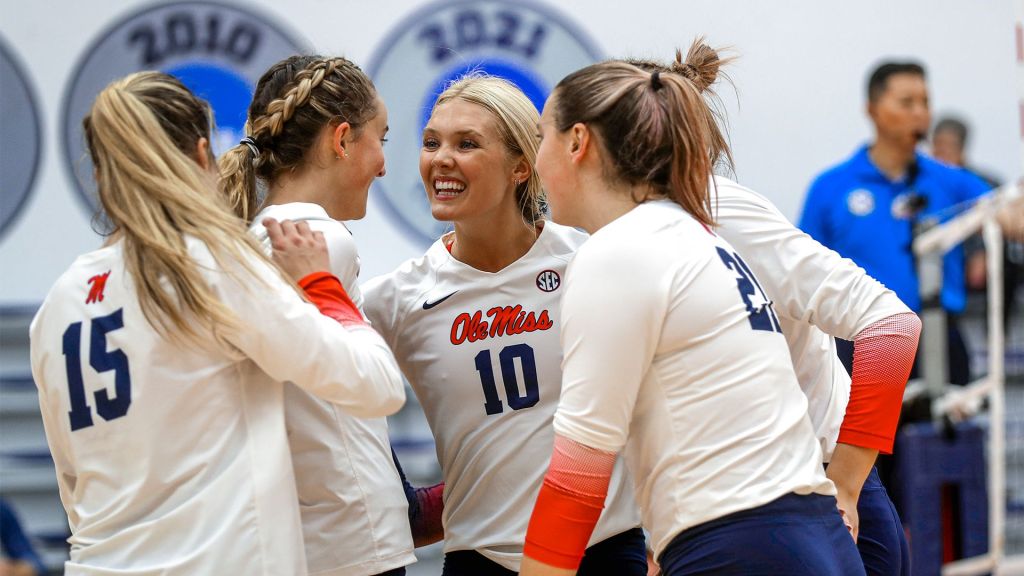 Trailing three sets to one, Ole Miss volleyball never wavered. The Rebels battled back to take the final two sets of the match and sweep the weekend series with Missouri Saturday evening inside the Gillom Center.

Playing without their leading attacker, the Rebels (9-10, 5-4 SEC) turned to their middle blockers to power the offense. Sasha Ratliff tallied a team-high 16 kills, hitting at a .419 clip, and Payton Brgoch finished in double figures for the second consecutive match, totaling 12 kills on a .435 attacking percentage.

Ole Miss opened the match for the second straight day with a strong first set. The Rebels built up an early 7-2 lead and took control. It was a balanced attack as the Rebels only needed 10 kills as a team to secure the set, taking advantage of 13 Tiger miscues. A kill from Julia Dyess and a block from Brgoch sealed the first-set victory at 25-15.

Missouri responded and flipped the script on Ole Miss in the second set. The Tigers jumped out to an early 5-1. Ole Miss tried to halt the momentum with a timeout, but Mizzou continued to run away with the set, building up a 20-10 lead. Missouri found the final five points to take set two, 25-16, and even the match.

With both teams tied at a set each, the third set was closely contested. Ole Miss and Missouri battled back and forth the entirety of the set, seeing the score tied 16 times. Late in the set, Dyess tied the score at 23, but back-to-back points for the Tigers gave them a 2-1 lead in the match.

The Rebels build up a 9-6 lead to start set four, forcing Missouri to call timeout. Out of the break, the Tigers recaptured the momentum with an 11-1 run and put the pressure on Ole Miss. Down seven, the Rebels had their backs against the wall. Vivian Miller and Ratliff stepped up, leading Ole Miss on a late 9-0 charge to get set point before Samantha Schnitta laid down the final kill and force a fifth set.

In the winner-take-all set, Ole Miss and Missouri traded points through 6-6. The Rebels capitalized on a pair of errors and a kill from Miller to take an 8-6 lead at the break. After switching sides, Brgoch and Katie Corelli helped increase the lead to four and inch the Rebels closer to victory. Ole Miss pushed the lead to five at 13-8, but Missouri wasn’t going away without a fight. The Tigers clawed all the way back to tie the set at 14 all. Needing to win by two, Dyess came away with a clutch kill, and Brgoch and Schnitta sealed the deal with a block to cap off the comeback win.

Ole Miss is back in action on Wednesday, October 26, when it travels to Starkville for an in-state battle with Mississippi State.