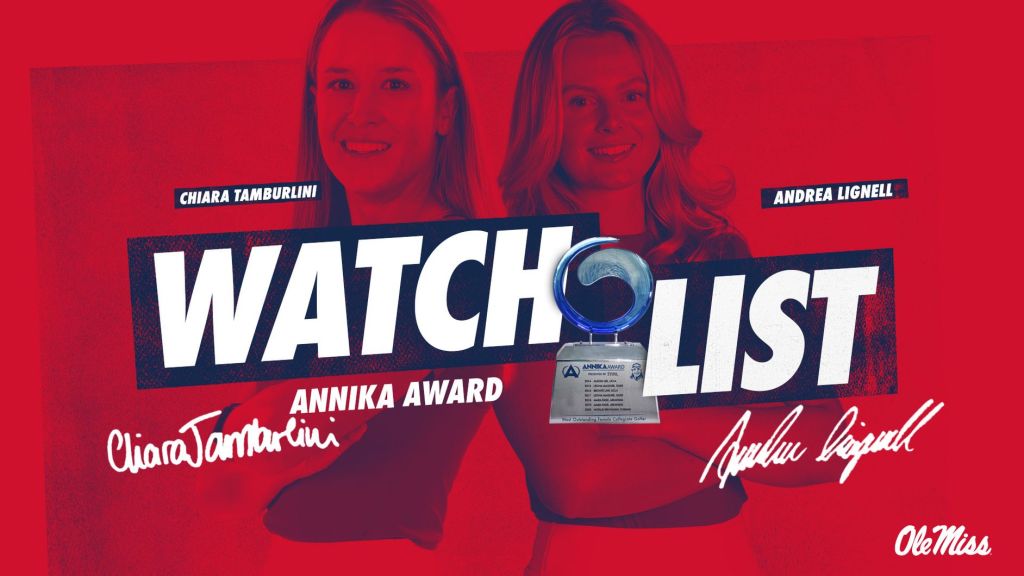 COLUMBUS, Ga. –A pair of Ole Miss women’s golfers were named to the final fall watch list for the ANNIKA Award, as announced by Golfweek and the Golf Channel on Monday.

Andrea Lignell and Chiara Tamburlini found themselves amongst 20 of the nation’s top collegiate women’s golfers named to The ANNIKA Award, presented by Stifel. The award is given annually to the most outstanding women’s college golfer, as voted on by players, coaches and media.

Lignell has appeared in the Rebel lineup for all three tournaments so far in the team’s fall season, shooting a stroke average of 70.11, which ranks as the fifth-best in the SEC. Eight of Lignell’s nine rounds played this fall have been under par, with Lignell setting new career-best 18-hole (67) and 54-hole (204) marks on the year.

The Gothenburg, Sweden, native has absolutely lit up the golf course to open her senior campaign for the Rebels. She notched the first two medalist finishes of her college career at the Cougar Classic and The Ally, along with grabbing a runner-up finish at the high-profile Blessings Collegiate Invitational.

Already sitting at two individual tournament wins on the young 2022-23 season, Lignell is now just the third Rebel in program history to have had multiple medalist finishes in the same season (Julia Johnson – 2017-18, Sarah Britt – 1992-93).

Tamburlini’s fall season has also been a successful one as the defending 2022 WGCA first-team All-American has appeared in two tournaments for the Rebels, recording a stroke average of 73.00.

Strong showings by Tamburlini at the Blessings Collegiate Invitational and The Ally helped earn the senior finishes of third and tenth place to open her senior season playing for the Rebels.

Ole Miss currently sits ranked No. 4 in the Golfstat Rankings and No. 5 Golfweek/Sagarin NCAA Rankings following a fall season where the Rebels have claimed team wins in two of their three tournaments.

Lignell, Tamburlini and the rest of the Rebel squad will wrap up their fall season Oct. 28-30 at the Battle at the Beach in Cabo San Lucas, Mexico.